‘The original motion [by DCF] is confusing and contradictory since a female cannot be transferred to Manson [a male facility] ... She is ordered transferred to Niantic as a transgender female. She is to be held in isolation for no more than 72 hours.’ 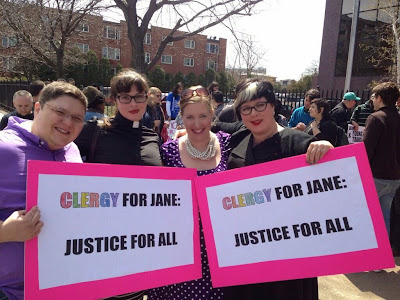 CLERGY SUPPORTING JANE DOE – Religious leaders were among about 50 protesters in front of Connecticut’s Department of Children and Families in Hartford on April 25. Although facing no charges, the transgender teen has been locked up in an adult prison for several weeks. From left to right are Rev. Emily Heath, pastor of West Dover, VT United Church of Christ; Rev. Chris Davies, Wapping Community Church, Windsor; Heidi Carrington Heath and Rev. Jes Kast-Keat, Associate Minister at West End Collegiate Church in Manhattan.
-Photo courtesy of Rev. Emily Heath

The strange case of 16-year-old Jane Doe – imprisoned and isolated for several weeks without charges in an adult jail – poses challenges just to keep up with all the strangeness.

The only clear conclusions from this mess are that Connecticut’s Department of Children and Families has failed its duty as a parent and prison is the wrong place to go for therapy.

Jane Doe was born as a male but now identifies as a female. She has spent most of her life as a ward of the state, suffering numerous assaults and rapes. She said DCF has given her hormone treatments to develop female characteristics and she has been confined in a male juvenile facility, among other unsafe places.

“I admit that I have acted out and got into fights, many DCF kids fight with staff and other kids while in placement,” Jane Doe said in a statement. “I am not saying it was OK to do this … ”

During an incident this year at an out-of-state placement, she allegedly assaulted a staff member but was not charged. A staff member was fired in connection with that incident.

DCF Commissioner Joette Katz, the former state Supreme Court justice, told WNPR last week she doesn’t want Jane Doe to end up in prison. This made me wonder why Katz put Jane Doe there in the first place ...


Posted by The Cool Justice Report at 3:10 AM