"She Had No Interest
In The False Arrest."
-- Poet & Professor Ravi Shankar,
Central Connecticut State University

EDITOR'S NOTE: This column is available for reprint courtesy of The Cool Justice Report, http://cooljustice.blogspot.com

Poet Ravi Shankar was profiled, wrongly arrested and locked up for 36 hours in New York City. Even after cops called Shankar a "sand nigger" and hummed "Here Comes The Bride" as he walked in a manacled procession at 100 Centre St., the Central Connecticut State University professor had yet to endure his greatest indignity. 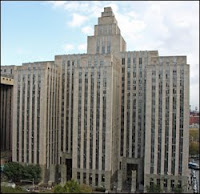 Pickholz revved up her tin ear and turned a blind eye to justice.

A diligent judge who enforced the Constitution might have done some fact-finding or made the prosecutor produce the cops who wrongly arrested Shankar. Pickholz, devoted to bureaucracy rather than justice, pretended she was doing her job by making sure the right boxes were checked on court documents.

Earlier in her career, Pickholz might have followed up on issues such as civil rights violations and accountability. She might have noticed or even cared about the theft of 36 hours of liberty from a citizen's life.

A former legal aid lawyer, Pickholz told The New York Times some years ago: "I consider arraignments the E.R. of the court system. We triage. Some cases need a Band-Aid. Some of them need major surgery."

Some triage for the poet wrongly held in lock-up.

Pickholz, besides evolving into a hack or apparatchik, demonstrates compelling signs of robitis. Typically, judges suffering from this malady lose touch with common sense and become arrogant from aggrandized self-perception. Given the incestuous nature of the court system, they are rarely held accountable for negligence, malpractice or failure to administer justice.

Meanwhile, Shankar is in New York this week meeting with several attorneys regarding a possible civil rights lawsuit.

He told The New Britain, CT Herald, in a story published Tuesday, he believed he was pulled over for "Driving While Brown." He passed a Breathalyzer test but was arrested on the false warrant.

Lawyers advising Shankar include: Brooklyn litigator Bruce Baron who, among other accomplishments, won reinstatement for a New York social worker who dared to investigate Woody Allen for child abuse.

Posted by The Cool Justice Report at 6:36 AM

Ruth Pickholz is indeed a loser judge. Thanks for posting this story. Having appeared in both N.Y. and CT. from the lockup, I can say it is a toss-up as to which state is the worst. Neither state had a case against me, but CT hit me with 13 bogus criminal charges and 69 years over two, and only two, dog accidents. This was not funny. I took it all the way to the U.S. Supreme Court, docketed #08-6378 last Sept. The City and State failed to respond. They knew in advance I would never be granted certiorari. It's rigged. The criminal 'justice' system is a joke and a charade in Amerika: YouTube; search Bill Doriss Connecticut. My true story: www.africanindependent.com/LAW_doriss_case1 and case2

is it possible that the judge, obviously a rude cunt, was just expressing the fact that the issue before her did not involve the false arrest, but rather resolving the case itself. I assume she dispensed with the case and Shankar went on his way. She didn't want to hear about the false arrest part because there was nothing she could do about it - maybe? I'm not a lawyer but that's what it sounds like to me.