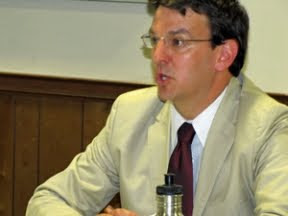 You Don’t Have To Be A Millionaire To Run For Congress
Bread, Not Bombs
Among Issues Fueling Krayeske Campaign

As Connecticut’s anti-war candidate, Krayeske will advocate a reallocation of resources from the military and corporate interests to food, clothing, shelter, health care and education for all Americans.

“It doesn’t take an Einstein to see that while ordinary Americans suffer in a horrendous economy, our limited resources are being wasted on reckless adventures in Iraq, Afghanistan and Pakistan,” Krayeske said. “If our incumbent congressman, John Larson, spent more time in the district, maybe he would understand this better and improve his voting record.”

“I pledge to bring these issues to the fore in the run-up to Nov. 2,” Krayeske said. 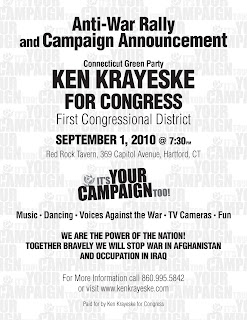 This election season will give an opportunity to elect a fresh face to Connecticut's 1st Congressional District. For over two decades, Ken has worked as an activist, journalist and concerned citizen.

He is not afraid to ask the hard questions that others are ignoring, and cover topics that have been pushed to the side. He will work steadfastly to assure the end of the wars and unite our 1st Congressional District in order to accomplish these goals together because “it’s your campaign, too.”

Over the last few years there has been little mention from Congress on stopping the wars or what’s being done to end them. Politicians have forgotten but the people haven't. Ken Krayeske represents us and wants to be the voice of our community and families who stand up against the wars.

He wants to show that civics and self-government are fun. He wants to help strengthen a third party alternative to the two-party system while injecting new ideas into the current national dialogue.

Ken Krayeske works as a law clerk and has been a proud resident of Connecticut’s First Congressional District, Hartford’s Asylum Hill neighborhood, for the past 12 years.

Growing up in Watertown, Connecticut, Ken, 38, attended public and private schools. From an early age, his parents instilled a strong work ethic. Krayeske was awarded his juris doctor with honors from UConn Law. He took the Connecticut Bar Exam in July 2010 and awaits the announcement of the results on October 15.

— Activist Ken Krayeske, best known for his arrest during Gov. M. Jodi Rell's inaugural parade and for tangling with UConn men's basketball coach Jim Calhoun over his hefty salary, is running for Congress on the Green Party slate.

Posted by The Cool Justice Report at 6:43 PM