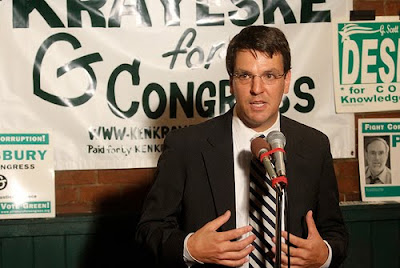 Ken Krayeske, the Green Party endorsed candidate for Connecticut's 1st Congressional District, puts himself on the line fighting for enforcement of the Bill of Rights and social justice.

Ken is seeking 9 debates, his GOP opponent seeks 6 and the Democrat incumbent sought 2.5k a head to party at a Redskins game.

He proposes dates, times, and locations, for the nine debates spanning one month and starting Sept. 29.

But even though the first date is only two weeks away, little organizational legwork has been done.

Krayeske admits that while he has reached out to Brickley, he has yet to contact Larson's campaign, or even the venues and moderators he has suggested. Seven of the nine venues he pitched are community colleges or high schools with the intent of getting students involved in the race, he said.

"I plan to do it soon," Krayeske said of preparation that would need to be done. "I plan to take the bull by the horns."

Socialist candidate Chris Hutchinson is "all for it," Krayeske added.

Larson spokesperson Maripat Finigan says the six-term congressman "traditionally has debates with all candidates, and I don't imagine that changing any time soon.

"We're working with a number of organizations that have done debates in the past, and we're looking forward to having a date" before November, Finigan said.

Like Krayeske, Brickley also is hoping for multiple debates at sites spread throughout the district. But so far, only one venue in Bristol has shown interest, campaign spokesman Chris Senecal said.

"The 1st District traditionally isn't considered a barn-burner, but this year could be different," Senecal said.

As for Krayeske's debate proposal, Senecal said the Brickley campaign was notified only through a press release.

Krayeske, who graduated from the University of Connecticut law school this spring, was arrested during the 2007 inaugural parade for Gov. M. Jodi Rell when he stepped out into the street to snap a photo of Rell. The charges were later dropped, and Krayeske has a pending civil rights lawsuit against the police.

He also attained national headlines in 2009 butting heads during a press conference with UConn men's basketball coach Jim Calhoun over his $1.6 million salary. 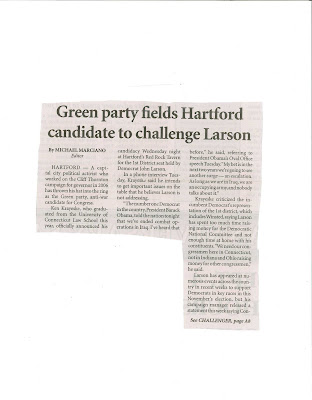 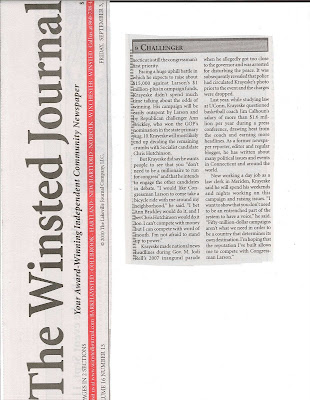 Posted by The Cool Justice Report at 12:58 PM