Mainstream Senatorial Candidates Compete Sucking Up To Massey, The Killer Coal Mine Company 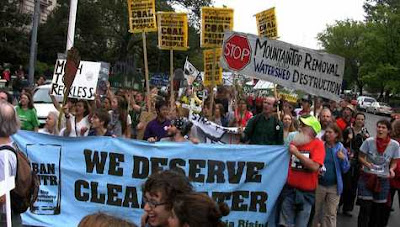 Appalachia Rising Despite Business as Usual

Editor's Note: Julie Eisenberg and Babette Hogan are independent documentary Producers and Directors based in the San Francisco Bay Area. They are currently producing "Seriously Green," a documentary about environmental and electoral activism, scheduled to be released in 2011. This story is available for reprint courtesy of The Cool Justice Report, http://cooljustice.blogspot.com

The ongoing drama over coal miner fatalities, profits and environmental destruction in West Virginia has moved to the political stage in a big way.

West Virginia Gov. Joe Manchin (D) filed a lawsuit Wednesday against the US Environmental Protection Agency (EPA) over its regulation of the practice of Mountaintop Removal mining in the state. The EPA promptly punched back with a report from a surprise inspection uncovering safety violations of Massey Energy, one of the state's most notorious and profitable coal companies.

Since 2009, the EPA has stepped up enforcement of the Mine Safety and Health Act and the Clean Water Act (both of 1977), which had been circumvented during the Bush Administration. The EPA has significantly cut down the number of permits granted. And late last month, Labor Secretary Hilda Solis addressed the National Mining Association Executive Board Meeting warning them that because of a few who have demonstrated a pattern of violations (POV) the agency had to hand down tougher regulations.

The two-term winning Governor Manchin has unexpectedly found himself in a tight race to replace the late Senator Byrd in a special election that he engineered, rather than appoint himself. His Republican opponent, John Raese (R), who has become flush with RNC campaign funds, called Manchin's lawsuit a political move, meant to show the coal industry that Manchin is still their man, despite his party affiliation. Third party candidate Jesse Johnson (Mtn. Party) sees this as political theater from both candidates.

"Manchin's always been for the coal industry just as Raese is," Johnson said during an interview on Friday. "Its business as usual and politics as usual. It's pretty obvious that both of my opponents stand for the coal operators and not the coal miners and their jobs and their communities."

At Wednesday's news conference at the WV State Capitol, Manchin thanked representatives from the WVA Coal Association and the United Mine Workers' Association for their support of his action, accusing the Obama Administration of attempting to "destroy our coal industry and way of life in West Virginia."

Don Blankenship, CEO of Massey Energy, the company responsible for the worst mine disaster in 40 years which killed 29 miners at the Upper Big Branch mine last April and now subject to new violations announced on Thursday, stood next to Manchin during the announcement and issued a statement supporting the Governor's actions. "Massey Energy applauds Governor Manchin's decision to combat the EPA's stance on mining permits, which threatens West Virginia jobs and jeopardizes the livelihoods of working families throughout Central Appalachia."

Johnson disputes the claims that the industry creates employment. He points out that much of the metallurgical grade coal extracted from the blown up mountains is exported to China, creating jobs there, while under-employing Appalachian miners. He contends that mountaintop removal endangers the health of the communities by sending toxic ash into homes in the area. While Johnson is not against coal mining altogether, he stands firmly against using it as a fossil fuel, envisioning a more permanent industry in his state through the creation of sustainable carbon-based products.

Johnson is running a simultaneous campaign for his home district house seat. He jumped into the U.S. Senate campaign after Manchin secured a one-time electoral exemption that would allow a person to run for more than one office at a time, a condition Republican legislators encouraged in order to permit the costly special election, as it would allow one of their favored candidates to run if she had so chosen. Johnson has faced Manchin before in the 2008 Gubernatorial race after he had come to national attention in his attempt to secure the Green Party's nomination for President, during which he spread the news that Appalachia was "Ground Zero" for Climate Change.

Manchin's pro-business approach has dominated his tenure in public office. At the 2008 Coal Executive Conference, the Governor reflected that he wanted West Virginia to be a friendly place to do business. He said, "If we could permeate the retail mentality in every government worker in the state of West Virginia, when the inspectors come out and they say 'Hey John, you've got a problem here. Now before I write you up for a violation, here's what I think you ought to do. I'll come back in a week, or month or whenever the rotation might be, then if you've tried to make those changes, we're working in the right direction.'"

When asked why Governor Manchin has received the endorsements of the United Mineworkers Union as well as the Coal Industry Johnson responded, "Now that's the $64.000 question. If you delve into the subject, you find a rather unholy alliance from the 1990's that started paying more than twice the amount of dividends to the coal miners union for the tonnage of coal from mountain top removal sites than for underground mining. This is being used to prop up their retirement and benefit funds. Instead of the union showing its force, it's adopted a non-growth plan for the union in order to protect this generation of miners and their leadership; but it does nothing to secure the future generations of miners."

Mountaintop Removal Mining (MTR) is recognized as a primary cause of water pollution in Appalachia, and as a contributor to global warming. Environmental groups have begun to join forces with local activists to combat the practice, recently culminating in a three day conference called Appalachia Rising. On September 27, the activists rallied at Freedom Plaza to hear leaders from throughout Appalachia make their demands.

People cheered as Maria Gunnoe, winner of the 2009 Goldman Environmental Award, took the stage. "It is past time for the Obama Administration to abolish the practice of mountaintop removal coal mining. It is killing off our culture and its people," said Gunnoe of Boone County, W.Va. whose home has been flooded repeatedly with toxic waste from a Mountaintop Removal site that sits above her land. "It is time to turn coal country into clean energy country. Who better to build the infrastructure to repower America than the people who powered it to begin with? We can build a new future starting now and starting in Appalachia, and starting with an end to mountaintop removal."

Johnson, a landowner in West Virginia's Coal River area, shared his outrage regarding the coal companies disregard for his state's heritage. He called for people to understand the significance of Blair Mountain, the historic site of the largest labor uprising in the nation that is presently being considered for mountaintop removal permits.

Former Congressman Ken Hechler (D), widely considered to be the grandfather of the environmental movement in West Virginia, lost his bid for the Democratic nomination for the Senate in the primary. Putting aside party loyalty for the moment, the 96 year old legend threw his support to Johnson because of the latter's strong stance on the environment. While Hechler could not go to the rally, he had a letter of endorsement read to the crowd. "Jesse is a fighter and a hell-raiser," Hechler wrote. "And he is the one to carry this baton." Hechler was pleased to see the Obama administration finally attempt to enforce federal regulations on coal mining including the 1969 Federal Coal Mine and Safety Act which he co-authored.

Several thousands marched from Freedom Plaza to the EPA and then to the White House in what is euphemistically being called the Woodstock of Anti-Mountaintop Removal. 100 Anti-MTR activists were arrested outside the White House.

A journalist from the Netherlands who had come to the States specifically to observe Appalachia Rising was surprised at the turnout at the march. He had expected 100,000 - 200,000 people, suggesting that all of Europe understands how critical it is to come to terms with our dependence on coal for energy. But, he said, "At least, this is a start."


Posted by The Cool Justice Report at 3:12 PM