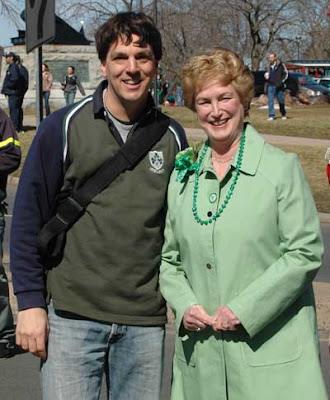 Political activist and freelance journalist Ken Krayeske filed a motion in federal court Friday in his effort to question Gov. M. Jodi Rell under oath as part of his lawsuit against a Hartford police officer who arrested him at Rell's inauguration parade in January 2007.

"Governor Rell's first-hand knowledge of her experience at the parade will corroborate Plaintiff Krayeske's claim that he did not enter the parade route, and that the false arrest was a result of his protected speech activities," Krayeske's lawyer, Houston Putnam Lowry, said in the motion.

Krayeske was arrested Jan. 3, 2007, as he took pictures of Rell during her inauguration parade following her victory in the 2006 gubernatorial election. Charged with breach of peace and interfering with police, Krayeske was held 12 hours on $75,000 bail, then released after it was too late to lead a protest outside Rell's inaugural ball.

The charges were dropped later. Krayeske, of Hartford, acted as campaign director in 2006 for Green Party gubernatorial candidate Cliff Thornton. Krayeske was the party's candidate this year for the 1st District seat in the U.S. House of Representatives. Democratic U.S. Rep. John Larson won re-election.

Posted by The Cool Justice Report at 2:39 AM