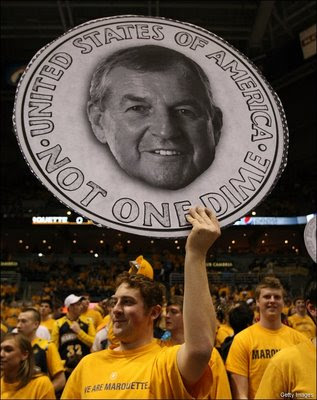 Courant /
Calhoun-Krayeske:
Another Episode In A Never-Ending Story

It was only a brief verbal exchange nearly two years ago — so it's kind of amazing how big a source of fascination and controversy it continues to be: On Feb. 21, 2009, Green Party activist/free-lance journalist Ken Krayeske asked UConn men's basketball coach Jim Calhoun if he'd be willing to take a cut in his $1.6 million salary during tough financial times for the state.

"Not a dime," Calhoun famously replied at a post-game press conference — and then the two went back and forth in video footage that made national sports news and has never completely disappeared. The incident remains available on YouTube and has been mentioned no fewer than 34 times in The Courant since it happened.

And recently, it turns out, it was the subject of a heretofore-undisclosed bit of behind-the-scenes legal wrangling, according to e-mails obtained in a recent freedom of information request.

Tweet
Posted by The Cool Justice Report at 6:04 PM