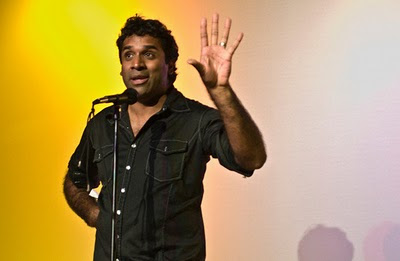 Poet and professor Ravi 'I Don't Play The Sitar' Shankar will be the guest speaker for the Litchfield-Morris Rotary Thursday at noon at The Forman School.

Rotary members and guests are welcome.

Shankar grew up in Virginia; he received a BA from the University of Virginia and a MFA from Columbia University. He is founding editor of the online journal of the arts Drunken Boat. Shankar teaches at Central Connecticut State University where he is poet-in-residence. He is also a faculty member at the Stonecoast Writers Conference and the MFA program at City University of Hong Kong.

His first book, Instrumentality, was published by Cherry Grove in May 2004,and was a finalist for the 2005 Connecticut Book Awards. He co-wrote Wanton Textiles (No Tell Books, 2006) with Reb Livingston, selections of which were published in Fringe Magazine and Beltway Poetry Quarterly. His chapbook Voluptuous Bristle, was published by Finishing Line Press in 2010.

His critical work has appeared in The Iowa Review, among other publications. He co-edited an anthology of contemporary Arab and Asian poetry, along with poets Tina Chang and Nathalie Handal, published by Norton in Spring 2008.

Tweet
Posted by The Cool Justice Report at 1:10 PM