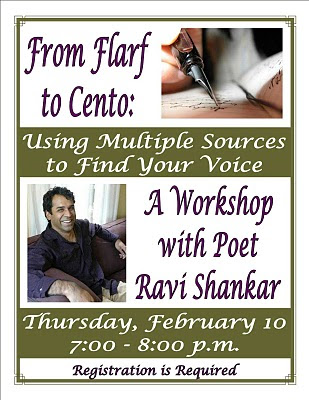 From Flarf to Cento: Using Multiple
Sources to Find Your Voice
A Workshop with Poet Ravi Shankar

In this workshop, we’ll catch up to what is current in the field of contemporary poetry, taking on things like the collage-form of the cento, the ancient Japanese form of the zuihitsu and the nonsense permutations of Flarf. We’ll read some poems beforehand and work on creating our own masterpieces of literary absurdity, finding the deeper stream of meaning that runs even in chance operations.

Ravi Shankar is Co-Director of the Creative Writing Program at Central Connecticut State University and the founding editor and Executive Director of the international online journal of the arts, Drunken Boat (www.drunkenboat.com). He has published four books and chapbooks of poems, including Seamless Matter, Voluptuous Bristle, Wanton Textiles and Instrumentality, a finalist for the 2005 Connecticut Book Awards. Along with Tina Chang and Nathalie Handal, he edited Language for a New Century: Contemporary Poetry from Asia, the Middle East &Beyond, called, “a beautiful achievement for world literature” by Nobel Laureate Nadine Gordimer. He has won the Pushcart Prize and received numerous fellowships and awards, been featured in The New York Times, The Financial Times and the Chronicle of Higher Education. He is currently on the faculty of the first international MFA Program at City University of Hong Kong, and at Central Connecticut State University. Norah Jones is not among his daughters.

Space is Limited -
REGISTRATION
IS
REQUIRED

Tweet
Posted by The Cool Justice Report at 1:11 PM