‘They are trying to keep a lid on this:’ Smoking gun document among items suppressed at FOI hearing on hidden records about a police-involved shooting 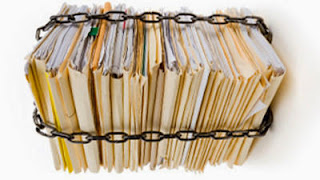 Around the time of a police-involved shooting at the Interlaken Inn in Salisbury, a state police source said: “They are trying to keep a lid on this.”

A state police report was available the night of the incident, Nov. 16, 2013.

Information about the case was requested multiple times by The Register Citizen beginning on Nov. 22, 2013.

Following is one of the documents suppressed today by hearing officer Matthew Streeter and coverage of the hearing by news outlets including The Connecticut Network and ABC affiliate WTNH Channel 8.

Other highlights of the hearing include State Police Lt. Paul Vance's denial under oath that he ever claimed to be the decider of what prompt means under the FOI law. Notably, Vance never disputed newspaper accounts of his “I’m The Decider” statements or the report of them in the complaint filed in December 2013 -- until questioned under oath on July 30, 2014.

On the above date and time, Troop B personnel were dispatched to 74 Interlaken Rd in Salisbury for a report of a domestic between husband and wife. Dispatch advised the husband is an off-duty Sergeant for Newtown P.D. and a firearm was accidentally discharged in the hotel room. Upon arrival, it was determined through the investigation that Johnny Cole (DOB: redacted by Cool Justice) and his wife Ellen Cole (DOB: redacted by Cool Justice) were at the Interlaken Inn on a retreat with several other Newtown Officers and their spouses. A verbal argument ensued after a comment made by Ellen Cole. While in their hotel room, Johnny was packing his belongings to leave for the night and in so placed his loaded service pistol on the bed to be packed. While Johnny was packing, Ellen picked up the pistol and fired one round in the opposite direction of Johnny Cole into the wall leading into the bathroom. The round exited into the bathroom and proceeded into the bathroom ceiling. The floor is separated by concrete flooring and did not penetrate the second floor upon investigating. Subsequent to the investigation Ellen Cole was arrested and charged with Unlawful Discharge of a Firearm, Criminal Mischief third degree and Disorderly Conduct. Interlaken Inn night manager on scene and aware of the incident. Newtown Sgt. David Kullgren of Newtown P.D. was on scene and was present. Capt. Rios of Newtown P.D. was notified of the incident and will handle a department inquiry as well.


THIS IS THE COMPLAINT
FILED IN DECEMBER 2013:

This is a formal complaint for denial of public records requested on Nov. 22 – verbally and then in writing – from state police officials at the Canaan barracks Troop B and Lt. Paul Vance at headquarters. There are strong indications this information was suppressed to cover up a police-involved shooting.

We request the maximum $1,000 fine and mandatory workshop training in FOI compliance for the offenders, as well as any other sanctions that could apply for this egregious violation. Such a violation cannot go unpunished in any state that considers itself part of a free society. We bring to the commission’s attention to Vance’s outrageous and unconscionable assertion that he is the “decider” of what is “prompt” under the provisions of Connecticut’s FOI law. This is not some secret formula proprietary to Vance and state police bosses do not constitute some form of royalty to which citizens must scrape for public records. Rather, promptly means immediately, unless the respondent can demonstrate to a majority of the FOI Commission that such production would interfere with the normal course of business.

The records sought were available immediately and without any heavy lifting required by state police personnel and Vance on the day they were requested.

At least one report – written by Trooper Lance Carlson – was filed the night of the incident. Elements of this report could and should have been produced in a matter of seconds, if not minutes. Indeed, Vance and various public servants have already spent much more time denying prompt production than it would have taken to produce the public records. Consequently, we also ask that state auditors review the illegal methodology employed on daily basis by state police to deny the public’s right to know. As the governor has made transparency a stated imperative in his administration, we also bring this emblematic example of the arrogance of power to his attention.

Finally, we ask the attorney general to act in the best interests of the state of Connecticut and use his discretion properly to deny representation to the state police for their systematic desecration of the public’s right to know. If the attorney general denies this request, we demand that any state lawyer acting to suppress public information in this case immediately disclose his or her salary at the FOI hearing on this case and the amount of time spent up to that point to prevent sunlight.

By virtue of this complaint, there could also be probable cause for internal affairs to investigate Vance for unprofessional conduct. Vance knowingly and willingly violated the FOI in what appears to be part of a pattern and practice to deny the public’s right to know. Investigators should determine in this particular case whether Vance went even beyond his normal practice of denial to give special treatment in the squelching of a report of a police-involved shooting.

The incident in question occurred on Nov. 16. Why are these public records still being suppressed?

Officials at the Canaan barracks and Vance refused on Nov. 22 and thereafter to produce public records including documents and audio tape. In what might be characterized as a sordid attempt at comic relief, the state police “legal department” wrote to us on Nov. 25 stating the request was under review. This correspondence inexplicably cited a “service fee.” There is no basis for a fee to review public records, or, if the state police have been granted some sort of special status to evade public disclosure of records ultimately owned by citizens, that should be rescinded.

Because it appears the state police violate Connecticut’s FOI law with impunity on a daily basis, we ask the FOI Commission, in the public interest, to grant an expedited hearing. We also request a subpoena of Vance to testify under oath. These short-sighted practices and policies are not in the interests of the state police or the state of Connecticut. The policies and practices of those in power only serve to lessen respect and trust of those troopers who put their lives on the line every day and need help from the public to uphold their sworn oaths.

If by some far-fetched reasoning or application this suppression of public information is allowed to stand, we ask the Legislature to consider and enact corrective legislation. A democratic republic cannot stand on such shaky ground and pretend to serve its citizens.

It is normal and customary for lay complainants in Connecticut Freedom of Information Commission hearings to be given wide latitude when presenting an opening statement. This is because the commission is supposed to be a people’s court, a vehicle to retrieve the people’s property when it is withheld by so-called public servants.

We are not aware of any opening statements being shut down in the manner employed by hearing officer Matthew Streeter. Indeed, on numerous occasions the rights of lay complainants to lay out their cases has been respected by the commission.

It is also normal and customary in such hearings for newspaper articles to be admitted as exhibits.

Notably, Connecticut State Police Lt. Paul Vance and Asst. Atty. Gen. Terrence O’Neill were able among themselves to authenticate the truth of another exhibit that was suppressed – an early state police report written hours after the Nov. 16, 2013 incident in question. In all likelihood, that is why they fought to keep it out of the official record.

As the hearing video shows, they didn’t have to fight very hard.

THIS IS A VERY SIMPLE CASE.

IT IS REPREHENSIBLE, OUTRAGEOUS, OBSCENE THAT THE CONNECTICUT ATTORNEY GENERAL, APPARENTLY ON AUTOMATIC PILOT, WITHOUT ANY PROPER DILIGENCE OR CONSIDERATION, ELECTED TO WASTE THE HARD-EARNED MONEYOF CONNECTICUT TAXPAYERS BY REPRESENTING LT PAUL VANCE AND THE CONNECTICUT STATE POLICE IN THIS HEINOUS EFFORT TO JUSTIFY THE HIDING OF PUBLIC RECORDS.

AFTER A NUMBER OF VERBAL AND WRITTEN REQUESTS FOR PUBLIC RECORDS WERE MADE IN THIS MATTER, LT PAUL VANCE STATED IT WAS UP TO THE STATE POLICE

TO INTERPRET THE FOI LAW DEMANDING ‘PROMPT’ PRODUCTION OF THE PEOPLE’S PROPERTY. LET’S PAUSE AND ABSORB THAT.

FOR THIS ALONE, VANCE SHOULD BE FINED $1,000, STRUNG UP IN THE PUBLIC SQUARE – JUST LIKE IN THE OLD DAYS IN THE PUBLIC STOCKS – FOR THE SHAME AND DISHONOR HE HAS CAST ON THE CSP AND THE CITIZENS OF CT.

The rest of the statement, suppressed by hearing officer Matthew Streeter, continues here:

IN THIS MATTER, VANCE HAS BECOME THE PERSONIFICATION OF UNDUE DELAY.

THIS IS A MATTER OF GRAVE PUBLIC CONCERN, NOT ONLY IN THIS CASE, BUT IN MORE THAN 2 DOZEN OTHERS.

DURING 2013, THE ORWELLIAN ‘PUBLIC INFORMATION’ ARM OF THE CSP UNDER VANCE HAS BEEN THE SUBJECT OF MORE THAN 2 DOZEN COMPLAINTS FOR VIOLATING THE PUBLIC’S RIGHT TO KNOW.

THIS IS THE MARK OF A POLICE STATE, A TOTALITARIAN SOCIETY – NOT A CONSTITUTIONAL REPUBLIC.

VANCE AND THE STATE POLICE CANNOT BE A LAW UNTO THEMSELVES IF WE ARE TO PRETEND THIS IS A FREE SOCIETY.

VANCE AND THE CSP NEED TO LEARN A LESSON IN ALL THESE MATTERS.

VANCE AND THE CSP ARE NOT THE DECIDERS WHEN IT COMES TO PRODUCING THE PEOPLE’S BUSINESS.

RATHER, THEIR PERVERTED INTERESTS, AS EXEMPLIFIED IN THESE CASES, ARE SUBSERVIENT TO THE LAW.

VANCE AND THE CSP ARE NOT THE LAW – RATHER, THEY ARE SERVANTS OF THE LAW.

CLEARLY AND ABSOLUTELY, THEY NEED THIS REMINDER IN A COMPELLING AND FORCEFUL WAY.

VANCE AND THE CSP DELAYED, STONEWALLED AND DID AN UGLY TAP DANCE WITHHOLDING PUBLIC INFORMATION.

THEY BROUGHT DISHONOR AND SHAME TO THE BADGE.

FINE THEM THE MAXIMUM AMOUNT.

STOP THIS BLITZKREIG BY ANTI-DEMOCRATIC FORCES AGAINST THE PUBLIC’S RIGHT TO KNOW.

SAY NO TO THE POLICE STATE.

VERY BRIEFLY, THE FACTS OF THIS CASE ARE AS FOLLOWS:

ON NOV. 22, 2013, VERBALLY AND THEN IN WRITING, ISAAC AVILUCEA ASKED STATE POLICE AT THE CANAAN BARRACKS AND VANCE FOR PUBLIC RECORDS ABOUT A POLICE-INVOLVED SHOOTING.

AT LEAST ONE REPORT – WRITTEN BY TROOPER LANCE CARLSON [or a duty sergeant] – WAS FILED THE NIGHT OF THE INCIDENT SIX DAYS EARLIER.

SIGNIFICANTLY, IN THE DAYS FOLLOWING THE FILING OF THE FOI COMPLAINT BY THE REGISTER CITIZEN, THESE PUBLIC RECORDS WERE PRODUCED FOR ANOTHER NEWSPAPER.

CLEARLY, VANCE SEEMS TO HAVE A PRACTICE AND POLICY OF PUNISHING THOSE WHO ASSERT THEIR LEGAL RIGHTS TO SECURE PUBLIC RECORDS.

THIS DESPICABLE CONDUCT CANNOT BE TOLERATED.

Posted by The Cool Justice Report at 2:58 PM

if the salient documents related to a pending case, then you don't get to see the documents until the investigation is complete. what don't you get? i bet it's covered in one of the first 3 or 4 exceptions to disclosure.

you eventually got them right?

Connecticut State Police bosses have implemented a rigged system to hide public records. This particular incident predates the state Supreme Court decision allowing police to hide even more public records. Clearly, this does not engender the public trust. Generally, the government class hides public records to shield itself from the oversight necessary for a constitutional republic.
Furthermore, State police violated their own phony excuse for hiding public records in this matter
http://tinyurl.com/p8sy77u