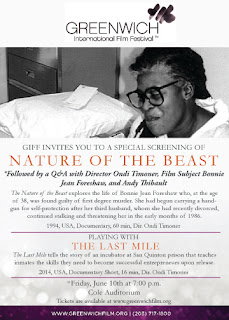 The Beast AKA The Court System Unchecked: Lies & Cover-Ups

GREENWICH -- Here's how it works:

The worst prosecutors and the worst cops see a big score. They see advancement. They see acclaim.

They see it nice and easy when the defendant is a black woman from Hartford.

Some relatives and friends have dreadlocks. She has dreadlocks!

The family -- as any household might -- keeps some baking soda in the refrigerator.

This is 'The Nature of The Beast.'

'The Nature of The Beast' is also a documentary film about the early years of the Bonnie Foreshaw case. The film, directed by then Yale student Ondi Timoner, premiered on PBS in 1994. It will be shown again for the first time since 1994 at the Greenwich International Film Festival at 7 p.m. Friday, June 10 at the Greenwich Public Library. Tickets are available via the film festival website,http://www.greenwichfilm.org/.

The film chronicles the state of Connecticut's blood lust to pursue the death penalty against a battered woman for an accidental and fatal shooting in 1986. It clearly details violations of her right to counsel and a fair trial. The film exposes how cops and prosecutors got away with jacking up charges to premeditated murder in a textbook manslaughter case.

Typically, a manslaughter conviction could result in about 10 years in prison. Foreshaw, drugged by the state during her show trial and virtually ignored by her incompetent lawyer, would get the longest sentence of any woman in Connecticut history up to that point -- 45 years.

“I was sure my film would force the powers-that-be to release Bonnie back in 1994, but the film went on PBS and nothing happened,” Timoner wrote in the prologue to 'more COOL JUSTICE,' my second collection of newspaper columns which features the Foreshaw case.

“I realized people weren’t watching documentaries in the early ’90s so I went to Los Angeles to try to get a TV movie made to reach people and start a movement,” Timoner said, “but I was told the story was too controversial.”

Foreshaw ended up serving 27 and a half years on a charge of premeditated murder of a woman she had never met.

Foreshaw wrote of her remorse in a volume of redemptive memoirs, 'Couldn’t Keep It To Myself,' edited by the novelist Wally Lamb: “I never lost sight of the fact that I still had my life and Joyce Amos, the lady who tried to help me that night, had lost hers. She had been someone's mother and someone's daughter, same as me. A powerful sadness was closing in. I began to ask myself how I could survive – or if I even wanted to ... ”

While in jail, Foreshaw was a surrogate mother and grandmother to many troubled women and teen-age girls. She was active in Literacy Volunteers, Alternatives to Violence and the Hospice Program. Guards called her a model inmate and a source of wisdom.

She was granted a clemency hearing in 2013 and ultimately freed after Digital First Media published a Cool Justice column with a memo called The Blue Note by former public defender Jon Blue — now a Superior Court judge. Blue and others argued the proper charge for the accidental shooting should have been manslaughter.

In the memo, suppressed for 24 years, Blue said, "The two most flagrant aspects of his [the fellow public defender's] representation were a failure to challenge a highly questionable confession and a failure to present an effective mental state defense."

During a series of abusive relationships dating back to her childhood, Foreshaw was raped, hit repeatedly on the head with a baseball bat and stabbed in the neck.

"A great deal of [this] relevant material was never produced [at trial] at all," Blue wrote. "No friends or family who knew Mrs. Foreshaw testified. A former husband had beaten Ms. Foreshaw on the head with a baseball bat ... and she had spent two weeks in the hospital. No hospital records were produced. Ms. Foreshaw had three failed marriages ending in domestic violence and divorce. No divorce or police records were produced. After she got out of the hospital, she had 'head problems' and went to see a neurologist. No neurologist was produced. The neurologist referred her to two different psychiatrists, who saw her a number of times. Neither of these psychiatrists was produced ... The end result was that the jury learned little or nothing about Ms. Foreshaw and what was really happening in her mind. She did not have an effective defense." More than two dozen lawyers had worked on Foreshaw's case since her arrest in 1986. Originally she was represented by a private attorney who dumped her because of her limited ability to pay. At the time, Foreshaw was a shop steward at a factory, owned a home and cared for three children. The original attorney had filed a motion to suppress a statement she gave under duress. Her statement, Blue noted, ends with the following sentence: "Det. Murdock has [advised] me of my rights I don't wish to [waive] my rights and sign this statement."

"No questions whatsoever were ever asked about this," Blue wrote.

The public defender, Blue wrote, "unaccountably withdrew the [suppression] motion immediately before the officer who had obtained the confession, John Murdock, began to testify."

Foreshaw had been taken into custody shortly after midnight on March 27, 1986.

"Officer Murdock," Blue wrote, "related that he began to interview Ms. Foreshaw at approximately 2 - 2:30 a.m. She wrote her statement out by hand but didn't sign it. The statement was introduced as a full exhibit and read to the jury, all without objection. The statement begins with a notation that it was started at 7 a.m. and finished at 7:30 a.m. What happened during the intervening 5 hours we do not know because Mr. O'Toole asked not one question about this interval, in spite of the fact that at least some innocent people might confess to killing their own mothers after being interrogated between 2 and 7 in the morning."

Timoner resumed her coverage of the case during and after the clemency hearing. She had gone on to win the Grand Jury Prize at the Sundance Film Festival twice: for 'DIG!' and 'We Live In Public.' Timoner, whose 'BRAND: A Second Coming,' had its TV premiere on Showtime last month, will host a question-and-answer session after the screening of 'The Nature of the Beast' at the GIFF.

'The Nature of The Beast' also exposes how cops and prosecutors concocted the fake drug story which allowed the federal government to place a lien on her house.

This so-called tip was used to cripple Foreshaw's defense. It demonstrates the laxity or corruption of judges who approve warrants with no actual basis for probable cause.

The tip, Cousins said, was that there was a lot of cocaine and guns at the Foreshaw house and Rastafarians with Jamaican accents and dreadlocks.

Wow, better watch out for those dreads.

One of Foreshaw's daughters was in the house when Cousins said no one was home. Witnesses saw cops with guns pointed at each window of the house as they broke down the back door.

"We got a lot of evidence of big time drug trafficking," Cousins said.

What did cops find? They found baking soda in the refrigerator.

Under federal forfeiture laws, for no good reason the burden of proof is on the accused. The Foreshaw family had to pay upwards of $90,000 to get the house back, thereby depleting any money for a competent lawyer.

The state would refuse again and again to appoint a special public defender with homicide trial experience.

The beatdown escalated in this Jim Crow court system. Cops and prosecutors suppressed crucial evidence about their main witness.

Their main witness, Hector Freeman, was the man who harassed Foreshaw, followed her out of a social club and threatened to "fuck her up" after she rebuffed his entreaties to buy her a drink.

Freeman pursued Foreshaw, would not leave her alone, followed her to her car. Freeman asked why Foreshaw thought she was “too good for a drink” with him. Freeman said again and again he was going to fuck her up. Freeman came toward her, he reached into his pocket. Foreshaw feared Freeman was going to pull a knife or a gun. Instead, Freeman pulled a pregnant woman in front of him.

Foreshaw, then age 38, simultaneously fired her gun. She hit the pregnant woman who died. That woman, Joyce Amos, was used as a human shield after trying to restrain Freeman.

The prosecution conveniently failed to disclose that Freeman had pending charges for assault of a police officer. A judge ruled Freeman's tainted testimony was just fine. That’s the way it works when the forces of the state want a conviction for an inflated charge regardless of the facts.

Blue wrote in another memo Freeman had a substantial history of assaults, including more than one against police officers: "It should have been shown that due to his menacing gestures and the fact that he followed the defendant to her car, his behavior was consistent with his history of violence and was sufficient provocation to cause a violent reaction or over-reaction from a person suffering from PTSD [Post Traumatic Stress Disorder]."

A psychiatrist says in 'The Nature of The Beast' Foreshaw was hyper-vigilant as a battered woman with PTSD, but that Judge Paul Vasington was not interested in PTSD, the core of the case.

'The Nature of The Beast' also exposes former Hartford Police Detective Stephen Kumnick -- who went on to become an Inspector for the Hartford State's Attorney -- at best, as less than candid.

Confronted with the fact that Foreshaw repeatedly asked for an attorney while being held for seven hours, and was told she needed to give a statement before calling a lawyer, Kumnick tells Timoner: "I'm not a mind reader."

During the clemency hearing in 2013, Kumnick was asked by Erika Tindill, chair of the Board of Pardons and Paroles, if he had any idea what was going on from 2 a.m. to 7 a.m. while Foreshaw was held in a room at the Hartford PD after the shooting.

“She may have been sitting in the interview room without anyone talking to her,” Kumnick testified. “We can’t force them to do anything they don’t want to do.”

Does anyone of sound mind believe any of Kumnick's assertions?

In another career highlight, Kumnick ratted out a fellow detective who was trying to cooperate with the federal government in an investigation of Hartford police corruption, according to a ruling by U.S. District Judge Janet Hall. That was related to a case in which James Thomas -- who prosecuted Foreshaw -- knowingly incarcerated the wrong man for a Hartford gang killing.

Even though no gun was recovered in the Foreshaw case, Thomas waved a long-barreled handgun in front of the jury. The judge had allowed it in as evidence.

In 'The Nature of The Beast,' Thomas says, "It was a fairly straightforward case ... I handled the warrant process."

This still makes me wonder why some people are in jail and others get to collect state pensions and play golf.

Foreshaw has begun work on a memoir. She has also spoken at libraries and colleges since being released on Nov. 15, 2013.

Posted by The Cool Justice Report at 11:35 AM