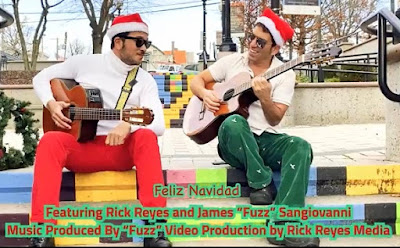 WPLR has scheduled Feliz Navidad to be on the air at 6:20 a.m. Tuesday, Dec. 8, as part of the Chaz & AJ McDermott Chevrolet & Lexus Toy Drive.
They plan to post the video on the 99.1 PLR and 95.9 THE FOX Facebook pages at the same time, a staffer said. 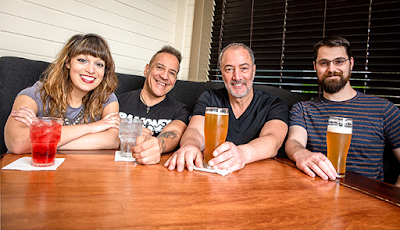 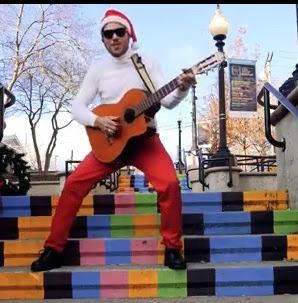 Rick Reyes, a self-taught guitarist, songwriter known for poetic lyrics, and leader of the Latin Rock band The Cosmic Jibaros, is a folk hero of Connecticut’s independent music scene.

In Puerto Rico, where Reyes grew up between early years in Bridgeport and his return to the Park City as a teenager, los jibaros possess the romantic individualism of American mountain men from an earlier era and are known for having a simple, honest connection to the earth, a strong work ethic, and wonderful music.

The Cosmic Jibaros blend Latin and Caribbean rhythms, rock guitars and global influences cross-cultural music that’s danceable, and hypnotically magnetic. Primarily sung in Spanish by Reyes, the songs are laced with social and political overtones, and energized by the pulse of congas, timbales, and effects-laden guitar work.

Reye’s songs range from exploring the illusory qualities of love (Illusion) to the wisdom of seeing everyday as a new opportunity (Todos Los Dias), and breaking the chains that prevent you from moving forward (La Cadena).

It all began with Reyes’ father, who played the guitar-like cuatro and wrote decimas, a form of poetry. Reyes was 13 when the family returned to Bridgeport from Puerto Rico. He didn’t speak English, felt alone, and even encountered racism. Recording his in journals became an outlet, and his musical future began to gel when Reyes’ father bought him a Harmony guitar from the Sears catalog.

“I remember playing a few chords and looking at something I had written. Just like that I began combining the two,” Reyes recalls.

He attended Sacred Heart University but spent all his free time writing songs, playing music, performing for the first time, and later forming The Cosmic Jibaros.

The band has performed at New Haven’s Art’s & Ideas Festival, The Gathering of The Vibes, New London’s Sail Fest, The SONO Arts Festival, and New England’s largest Hispanic festival, The Areyto Festival, as well as appearing on TV and playing storied clubs like The Cutting Room and The Bowery Ballroom.

In 2009, the band toured Puerto Rico, and has opened for music legends, Sergio Mendes, Gato Barbieri, and Eddie Palmieri.

While music is Reyes’ passion, he also has a career on the sales side of the textile industry interior design industry and currently serves as a sales representative for Maxwell Fabrics.

In his “spare time,” Reyes works to improve the community with nonprofits such as the Greater Bridgeport Latino Network, the Cultural Alliance of Fairfield County, City Lights Gallery, and others. 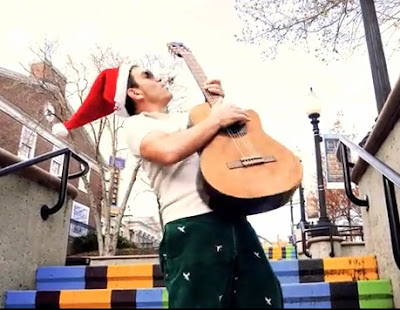 ABOUT FUZZJames Sangiovanni, better known in the music industry as “Fuzz” has been an international recording artist, professional musician and music educator for over 20 years. Guitarist, multi instrumentalist, vocalist, songwriter and producer, Fuzz has performed and toured globally with acts such as the Tom Tom Club, Allman Brothers Band, Emmylou Harris, Phish, John Scofield, James Brown, Deep Banana Blackout, Caravan of Thieves and many of the legendary musicians who live and work in New Orleans including Dr John, The Neville Brothers, The Meters, The Revivalists, Galactic, The Rebirth Brass Band and The Dirty Dozen Brass Band.

Being a well traveled and experienced musician, Fuzz learned how to work with many different kinds of people from different backgrounds, cultures, ethnicities and countries of origin, and came to realize that though we are all individuals, we have so much more in common than we are led to believe, especially in music and art. And it’s in the collaboration between people, where the most innovative and valuable ideas come from.
Sponsored by City Lights

City Lights & Company is a nonprofit organization, based in Bridgeport CT for 16 years, that serves the community through art. We are honored to sponsor this music video with Rick Reyes and Fuzz Sangiovanni and applaud the efforts of WPLR radio to support the Toys for Tots project. City Lights believes in the power of the arts to engage, enrich, nurture, heal and inspire. Our signature programs include the Bridgeport Art Trail and outreach programs that enrich the learning experience for youth.
Posted by The Cool Justice Report at 5:03 AM