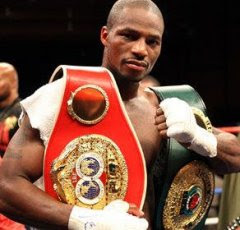 By GEORGE KIMBALL
The SweetScience.com

HARTFORD, Conn. -In a facile and largely untroubled performance in a fight he at no time seemed in any danger of losing, Chad Dawson took the measure of 40 year-old Glen Johnson and remained undefeated at 28-0, solidifying his claim as the world's best light-heavyweight. But he sure wasn't taking any chances.

On the other hand, when Dawson somewhat giddily proclaimed afterward "I had to put on a show for the home folks," some of the home folks seemed to be shaking their heads as if to say "Did he just say that?" That Bad Chad had just won a version of the 175-pound championship for the third time was indisputable, but that, at least on this evening, Chad was Bad at all remains somewhat open to dispute.

Posted by The Cool Justice Report at 9:56 AM