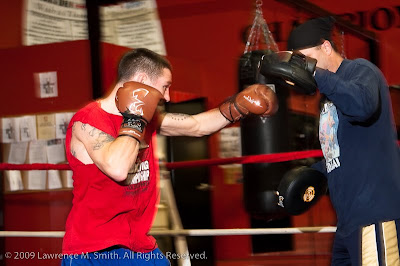 “Matt had more skill,’’ said Paul Cichon, Remillard’s trainer. “At the end of the fight Robbins told me that he thought had might have some broken ribs. But the guy did pull a lot of stuff that Matt’s never seen before.’’

Even though he had never been to Tennesseee, Manchester featherweight Matt Remillard felt right at home in Knoxville on Saturday night.

“I’ve always been big into country music so it was a good time for me,’’ Remillard said.

Appropriately, Remillard performed a tune-up on Marty Robbins (23-45-1) of Crossville, Tenn., knocking him down in the second round before going on to win a unanimous decision in a six-round bout at Cotton Eyed Joe’s Dance Club in Knoxville.

Remillard (20-0) took the bout on short notice because he wanted to get in some work before his rematch with Rafael Lora on Jan. 29 at the Mohegan Sun Arena. Remillard stopped Lora in the fourth round in September at Nomad’s Adventure Quest in South Windsor. The finish was controversial, however, because many in the crowd thought Remillard hit Lora in the back of the head with a punch. Remillard captured the vacant North American Boxing Federation featherweight title by beating Lora.

Remillard, 23, was pleased with his effort in Knoxville.

“It was definitely worth my while,’’ Remillard said. “I got to fight a slick southpaw with over 60 fights. I boxed him well and dropped him with a right hand in the second round.’’

Robbins, 40, had the edge in experience, but not in talent.

“Matt had more skill,’’ said Paul Cichon, Remillard’s trainer. “At the end of the fight Robbins told me that he thought had might have some broken ribs. But the guy did pull a lot of stuff that Matt’s never seen before.’’ 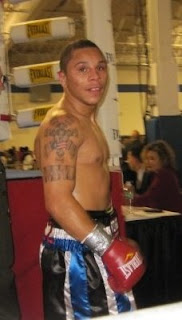 On the undercard, East Hartford lightweight Joey “Chip” Perez, 23, improved his record to 2-0 with a victory over Luis Cruz of Memphis.

The Johnny Duke Western New England Golden Gloves Tournament will be held on four consecutive Saturdays at Nomad’s beginning on Jan. 16. All tickets for each Saturday will be $20. The action will get underway at 7 p.m. on all four Saturdays. Tickets may be purchased at Nomad’s or by calling Cichon at 860-614-8877.

Kelly Pavlik hammered away with a flurry of uppercuts, then raised his hands and jumped into the arms of trainer Jack Loew.

The WBC and WBO middleweight champion had successfully declared his return to boxing.

Pavlik stopped Miguel Espino in the fifth round to defend his titles and end what has been a difficult year on a high note.

After a 10-month layoff because of a staph infection on his left hand, Pavlik dropped Espino to a knee in the fourth round with staggering right uppercuts. He then knocked Espino down in the fifth, and trainer John Bray threw in the towel while referee Steve Smoger stopped the fight 1:44 into the round.

“We’re not going to have another layoff,” Pavlik said. “The hand held up great. It’s a little tender, but nothing ice can’t fix.”

It was going to take more than ice to repair Pavlik’s image.

Pavlik was the target of rumors and criticism for looking sloppy in his last fight, a win against Marco Antonio Rubio in February, then losing the chance to fight Paul Williams because he needed 10 months to heal a staph infection on a knuckle of his left hand.

Espino (20-3-1) was rated the No. 3 contender by the WBC, though few gave the fighter from North Hollywood, Calif., much of a chance. He was deducted a point for punching after the bell following the first round, then was warned in the second and third for repeated low blows. Bray said the plan was to circle to the right and jab for the first four or five rounds, and Espino quickly scrapped that idea.

“As soon as Miguel got hit, the warrior came out and he went toe to toe,” Bray said. “He didn’t stick to the gameplan. He’s a real warrior. Kelly Pavlik is a great champion and a big puncher. We fell into his trap.”

Espino wasn’t impressed by Pavlik’s punching power, and he didn’t recall ever taking a step back because of a blow from the champ.

“I thought I hurt him a few times,” Espino said. “He didn’t think I could hit. He thought he could bully me, but I don’t remember taking one step back. ... If there was ever a day to take a champion down, today was the day.”

Posted by The Cool Justice Report at 12:44 AM