Dad on a Lark: Already Gone 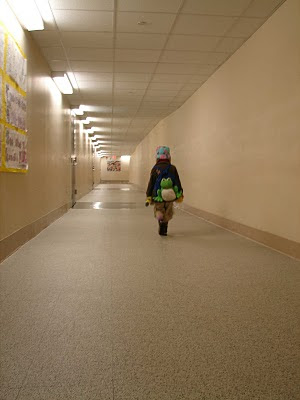 I'm going to take a bit longer than usual, because this is my last entry in the Dad on a Lark saga. The column has acquired some truth-in-advertising issues: she isn't "baby Larkin" any more, not even "toddler Larkin;" and I'm not really a stay-at-home dad. Well, I'm at home, but she isn't. She's at school most of the day, in pre-K-3. Initially my plan was to pick her up at 12:30 every afternoon. But I ended up wanting to work more, she wanted to hang out longer in her new world, and so her school days stretched out bit by bit.

Most change happens gradually in our lives, which is why we all have those "I-looked-up-and-suddenly" moments. When Larkin was born, my friends - whose kids were in high school or college already - wistfully advised me to pay attention, because before I knew it, she'd be half grown up. It goes so quickly, they'd say.

It didn't seem that way at first. In fact, the first year or so went quite slowly. But then things speeded up. Larkin is four now. Summer is coming. And suddenly I look up and…

She can do so much. She can write her name and read simple words. She has friends. She has a personal history, a past. "Remember the old days," she'll ask, "when I used to pee in a little potty?"

And she engages with me, with adults generally, in complicated ways. Your relationship with a baby or an early toddler is wildly lopsided, the efforts and affections almost all one-way. No longer. Larkin understands motives and vulnerabilities and tactics; she engages in shameless manipulations. "Dad," she'll say, "I want to explain something to you." Invariably this means a request is coming. She makes her pitch, and then I say no to the candy bar/ extra half hour of video/ fifth cookie. "Remember the deal we made ten minutes ago?" I'll ask.

"I know, Dad, but… See, sometimes my heart just seizes on something, and then I have to have it, and I'll be really really REALLY sad if I don't!"

Yesterday, a Saturday, I had her for the afternoon while Molly was off elsewhere. We stopped by her cousin Matthew's to play; did a little shopping; went to a museum and looked at paintings; came home. These long afternoons-into-evenings can have their rocky moments. Toward evening I parked her in front of a favorite video, Spirit Horse, while I got dinner ready. First we argued over whether she could eat in front of TV. Then over how long she could watch before dinner. I went out to the kitchen and returned a few minutes later to find that she had taken the paper insert out of the DVD jacket and torn it up. Shreds and little rolled-up balls of paper lay everywhere. I turned off the video and, over her shriek of outrage, carted her upstairs to her room for a timeout.

She wailed away for a while, then calmed down, and eventually called out: "I'm ready to talk about it!" (This is the well-established timeout routine: her transgression; our discussion; lessons learned; restoration.) So, I asked her, why did I have to bring you up here? "Because I tore up the Spirit Horse paper." And why did you do that?

"Because I wanted to, but it was bad behavior."

It looked as if we were back on track. Then she asked about dinner and whether I could make her mac and cheese.

"Yes. We have mac and cheese."

"But is it mac and cheese from today?"

This is an annoying food fetish of hers - refusing leftover noodles, demanding fresh pasta every day. I explained, for the hundredth time, why we don't throw yesterday's food away.

"But I don't WANT pasta from yesterday!" she wailed. "I want you to make it FRESH!" And now here we were, revving the fight engine all over again.

"Larkin," I said, "you're obviously not ready to stop crying and come eat the dinner I've prepared for you, so I'm leaving you up here to think about it."

This time it was a good fifteen minutes before I heard her call out, "I'm ready, Daddy!" I went up to find everything changed. She was composed, almost beatific, playing with her toys and singing quietly to herself. I took her hand and we went down to the kitchen and ate dinner together. "Yummy," she said, digging in. "It's delicious!" She was bending over backwards to make amends. Without prompting, she ate everything on her plate - a rare occurrence.
Two hours later Molly returned and took over, putting Larkin to bed as I sat in the living room and watched the evening news. I was bone tired. After a while Molly reappeared. "She wants to say goodnight to you," she said.

Larkin's room was dimly lit by her sunflower nightlight. She was lying on her back, blankets tucked in halfway up her chest, and held her arms out to me. "Daddy!" she whispered, in a hushed, ultra-affectionate tone.

I gave her a hug, and she stared at me and stroked my face.

"We had our ups and downs today, didn't we, beetle?" I said.

She nodded. "With some bad behaviors," she said.

"That's true. But the important thing is, we both came through it, right?"

She stared at me earnestly. "That's because we know each other," she said.

I left, smiling and shaking my head. It's strange, I told Molly, how adult it all seems sometimes. "We had a fight, and then we made up. The rancor and then the reconciliation. It's the whole package."

Sometimes these days I find myself remembering the first months of Larkin's life, when we all slept together each night in our room. Molly and I had always seen ourselves as anti-family-bed people, and with Larkin we'd envisioned this tidy sequence of moves, leading to her healthy independence and our happy recapture of privacy within a couple of months. But it turned out to be a struggle at every step - a struggle for us, that is. And especially for me. I didn't want her to leave our bed, and then I didn't want her to leave the bassinette right by our bed. In the end, we mostly followed our plan, and by five or six months Larkin was sleeping in her crib, in her room. But it hurt, and it continues to hurt, these separations that begin with your child's birth: out of your wife's body, then out of your bed, your room, eventually out of your house and finally out of your lives. And that's the problem: each stage carries with it a premonition of the whole shebang. She's just down the hall… but… you miss her.

The first day of school last fall, Larkin didn't want to go. To bolster her resolve, Molly and I gave her a little blue glass bead, like a translucent pebble, to carry in her pocket. Our love was in the bead, we said, and if she needed it during the day she could reach in and feel it. With the bead stowed away in her pocket, Larkin literally took a deep breath, grabbed her brand-new bookbag, and said, "OK, I'm ready." So much has happened since then. She turned four and celebrated by eating so many cupcakes, she threw up. She memorized books and songs, learned to sit "crisscross applesauce" on her assigned square on the alphabet rug in her class. She acquired buddies, and now has both home and away playdates, sleepovers too, without us there.

The pre-K-3 classroom is located in the basement of Larkin's school. It's the only classroom down there, and every school morning this past year she and I have walked the long, brightly-lit hallway to her room at the far end. The hall floor contains two downward inclined sections, like built-in ramps, and sometimes we run down those, picking up speed as Larkin shouts, "I feel the gravity!" At the start of the year, when she was still uncertain about the whole school thing, we developed a parting routine: I'd sign her in, and when I was ready to leave, she'd stand outside the classroom door to watch me walk back down that long hall. Twice along the way I'd turn, and we'd exchange a wave.

At the door to the far stairway I would stop and wave one last time, calling out, "Bye-bye, beetle, have a good day!"

A few months ago she started skipping this little ritual, or rather forgetting about it, diving instead into the start of her day and the company of her classmates. The waving routine had begun in her need to be reassured by me, and she was growing out of it. The day before yesterday, though, something must have reminded her of it, because when I left, she raced to the door and called out to me. It had been weeks since we'd done this--since Larkin had needed to do it -- and with a smile I turned and waved, then kept walking down the hall. At the far stairway door I turned to wave a last time, and called out "Bye-bye, honey, have a good-"

But she was already gone.

Rand Richards Cooper is the travel correspondent for Bon Appétit, and is author of a novel, The Last to Go, and a collection of stories, Big as Life. Cooper is also a board member and judge for the Connecticut Young Writers Trust.
Posted by The Cool Justice Report at 4:42 AM