Fueled by false reports of a recent arrest, Regents meet – and then withdraw move to rescind prof’s promotion

I am profoundly sorry for any impact my personal problems have had on my family, my students, my colleagues in the English Department, the Administration and the CCSU community at large. I am so very grateful for the support of all my friends and colleagues. I wish I could say more at this time. Please know I will continue to apprise Human Resources of any developments as I complete my obligation to the court. My attorney, Jake Donovan, has advised me to limit my remarks to what I just said. I am also deeply grateful to attorney Donovan for his guidance. 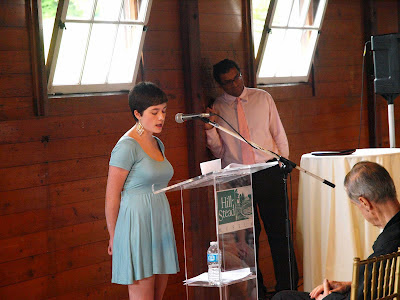 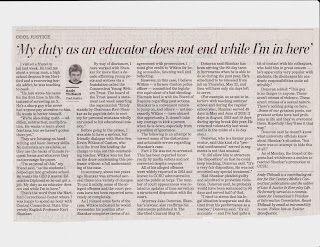 Cool Justice Editor’s Note: WFSB TV3 and The Journal Inquirer were among the outlets reporting the false information.

I visited a friend in jail yesterday. He told me about a young man, a high school dropout from Hartford and a recovering heroin addict he was teaching to read:

“He just wrote his name for the first time in his life, instead of scrawling an X. He's a sharp guy who never had anyone pay attention to him. He wants to better himself.

“We're also doing math – addition, subtraction, multiplication. He wants to learn about fractions, but we haven't gotten there yet.”

They are focusing on handwriting and basic literacy skills. No materials are available, so they use the backs of inmate request forms and whatever they can scrounge for paper.

“I'm as proud of this,” my friend said, “as the students I helped get into graduate school. He wants his GED [General Education Diploma] so he can get a job. My duty as an educator does not end while I'm in here.”

That's the word from the Hartford Correctional Center where I was happy to spend an hour with Central Connecticut State University English Professor Ravi Shankar ... 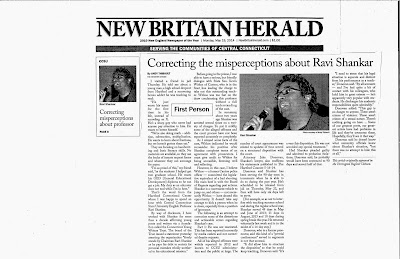 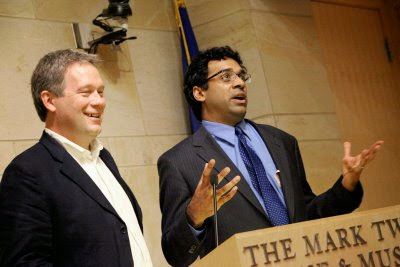 I am outraged at today's editorial for several reasons. First, there is no discussion at all of the merits of Professor Shankar as an academic. Nothing at all about the criteria involved in promotion (quality of teaching, student evaluations, scholarship, etc.). Second, if conviction of a crime is the litmus test for being a professor or in the employ of Central, I can think of a number of professors and administrators, past and present, who would qualify under that metric for dismissal. Third, as you are chief executive officer of an organization that has over 900 employees, I don't know how you are expected to know where each resides when they are not on campus. Fourth, to read the Courant one might conclude that it is the President, alone, who decides who should be promoted. No mention of the input from the department, the Dean, the campus-wide promotion committee, or the Provost.

I am a defender of freedom of the press. The Courant has every right to its opinion. However, I hope that the university will respond to this. As others have noted, this week has seen people taking cheap shots at you.

Moreover, the holier than thou attitude of the Courant needs to be addressed. Which person associated with a college or academia at large, was perfect? Did we not once have a Vice President of Student Affairs who not only lived in a dormitory, but by doing so deprived a student from living there. Was not the man who invented the transistor and won the Nobel Prize also accused of racism? And I hope that AAUP does not let this matter go unanswered either.

Please note that I take no position at all on whether Mr. Shankar deserved his promotion or not. But I do believe that there has to be a process, and, as far as I can tell, Mr. Shankar's previous transgressions did not occur on campus, did not involve students, and in no way inhibited him from teaching or publishing. And I expect that there will be those who object to my intervention here. So be it.

In 1975, the same year that I came to Central, Eastern Ct, our sister school in Willimantic, hired Warren Kimbro as Assistant Dean of Students. In 1969 Mr. Kimbro was convicted of brutally murdering Alex Rackley. In exchange for turning state's evidence at the trial, Mr. Kimbro was released from prison, whereupon he earned a Master's Degree from Harvard University, the finest one in Cambridge. The then-president of Eastern described Kimbro as the finest applicant for the job.

Some of you will remember that I taught African American History at Central. I cited the Kimbro case occasionally in class to see how students reacted to it ... Of course you can all look this up for yourselves, if you are interested. You have a lot more time to think and reflect when you are retired.

Ben
Posted by The Cool Justice Report at 3:06 PM