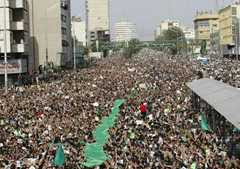 
WILMINGTON (The Borowitz Report) – Galvanized by Republican senatorial nominee Christine O’Donnell’s anti-masturbation stance, masturbators from across the state converged on Wilmington today in what some are calling the largest pro-wanking protest in American history.

Harley Farger, a leading Delaware masturbator and planner of the Million Masturbators March, said it was difficult to organize masturbators “because they’re used to acting alone.”

A spokesman for the Wilmington Police Department, Crandall Darlington, said that the Million Masturbators March could cost the city tens of thousands of dollars, “especially when you include the cost of cleaning up afterwards.”

Andy Borowitz's Books at Amazon.com
Posted by The Cool Justice Report at 6:38 AM

that's funny. is it for real?