El Bardo The Legend's Thought For The Day 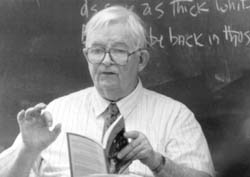 "I went to work but I wrote every day. Sometimes I didn't know what I was doing, but I just did it. I was like a ballplayer who bats a ball in a vacant lot and everybody wonders what he's doing. They wonder.

"They wonder if he's crazy. One day they let him play in the game. He's been hitting that ball so long that when the guy throws it, he knocks it over the fence and everybody says, 'How did you do that?'

"Because he got his swing, he got his motion, he knew what he was doing. And he practiced. That's the kind of life I've lived, I wrote poems from 1947 to 1974 before I got my first book."

Posted by The Cool Justice Report at 8:08 AM