Didn't Know Where He Was
When Congress Voted
For Economic Collapse

Krayeske says Larson has done “a fantastic job” as a Congressman, but to him he represents “failed policies.” After speaking with a lot of ranking Democrats, they understand that Connecticut needs a third party, but they can’t tear themselves away from Larson, Krayeske said. “To me, he hasn’t done a good enough job.”

According to Krayeske, one oversight is with regard to certain financial policies that were passed through a bi-partisan effort in the House and in the Senate about ten years ago. The financial regulatory reform bill recently passed did not do enough to help Americans, mainly because the end result did not feature a repeal of the Depression-era Glass -Steagall Act, which divided commercial and investment banks and whose repeal is largely attributed to the rise and fall of banks like Goldman Sachs and AIG, who were given unprecedented taxpayer bailout money.

“Any history teacher knows why we passed Glass-Steagall,” Krayeske said.

Larson, however, did not show up to cast a vote, while Democrats Rosa DeLauro and then Second District Congressman Sam Gejdenson voted against eliminating the wall. Democrat James Maloney and Republicans Nancy Johnson and Chris Shays voted in favor of the act.

Another Clinton-era law that exempted government regulation of the derivatives market, the Commodity Futures Modernization Act, which Krayeske says allowed “Wall Street to gamble like they were at a casino with other people’s money,” passed in 2000. Along with the overturning of Glass-Steagall and passing a law that created extremely complex financial instruments, these two deregulations have largely been attributed to the economic collapse two years ago.

Larson, along with the whole Congressional delegation sans Chris Shays, voted in favor of the deregulatory move. “He was asleep at the switch,” Krayeske said. “I think he’s done a great job, but we need somebody who can do a fantastic, supercalifragilistic job.”

Although touted by Democrats as a major achievement on cracking down on the large banks, Krayeske points out that this is the kind of problem that people need to be aware of. Democrats, who have taken more money from Wall Street than Republicans, did not do enough to pass solid finance reform, he says. “His livelihood as a Democratic leader relies on him not understanding certain things,” Krayeske said.

When initially asked about his absence for a vote on the Gramm-Leach-Bliley Act during an interview, Larson seemed unsure.

“Oh, no, Glass-Steagall – I was in favor of restoring that,” Larson said. When asked again why he didn’t show up to vote for it, Larson turned to his aide and asked for a clarification, who said he would check back.

“If I missed it, there was a good reason for it,” Larson said. 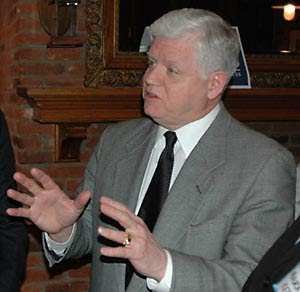 Larson’s campaign later sent an email saying that he was on Park Street in Hartford at a Latino market with President Bill Clinton during the vote. “He hosted then President Clinton in Hartford as part of the President’s effort to spur the economy, emphasize the city’s redevelopment efforts and highlight his “New Markets” initiative,” said Paul H. Mounds, District Communications for the Larson campaign. 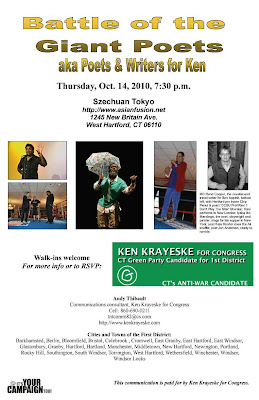 Posted by The Cool Justice Report at 3:45 AM