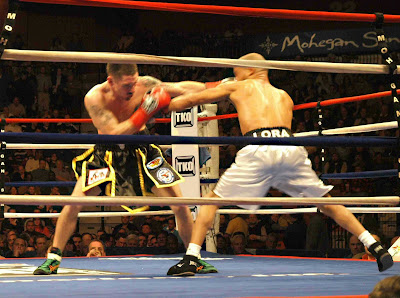 Cool Justice Editor's Note, Re; reports of HBO Fight 3-26-11: As of today papers have not been signed ... They're still putting it together ...

"Matt is a tremendous, exciting fighter, “Hall of Fame promoter and Top Rank CEO Bob Arum said. “We are very pleased he has joined our organization. Matt will get a lot of national exposure while fighting for Top Rank."

“Top Rank has some of the best fighters in the world,” an ecstatic Remillard commented “It’s the best promotional company in terms of moving fighters and getting them big fights. I’m really excited about signing with Top Rank. I remember when I first started fighting that Top Rank was the best promoter and now I’m finally there with them. Bob Arum and his team will get me to the next level where I should be.”

Remillard has shown some signs being like a young Micky Ward, another New Englander known for his vicious, devastating body attacks. Lately, “Sharp Shooter” has been zeroing in on his opponents’ livers with breath-taking shots and, consequently, sudden stoppages.