EDITOR'S NOTE:
If you can't make it in person, just tune in to RegisterCitizen.Com (we'll have a link up prominently), and there you'll find a video feed of the class and a "live chat" session that will enable you to answer questions or add comments posted during the class.

Matthew Reed was appointed as South Windsor's police chief on May 16, 2010.

Chief Reed, a native of Springfield, Massachusetts, served in the United States Army as a military police traffic accident investigator at Ft. Hood, Texas from 1983 until 1986. 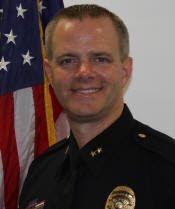 He was hired as a South Windsor police officer in 1987 and served in the patrol section as a patrol officer and supervisor. Chief Reed served as the department’s youth service officer from 1989-1991 and was responsible for the implementation of the DARE program at the Timothy Edwards Middle School. After his assignment as youth service officer, Chief Reed returned to the patrol section.

From June 2005 until his promotion to chief, Reed was assigned as commander of the Operations Division. As division commander he was responsible for the officers on patrol, the criminal investigations unit, the school resource officer program, the police canine program, the traffic safety enforcement and investigation unit, the community service officers and the special enforcement unit.

Chief Reed lives in South Windsor with his wife and five children.
--
Thomas Hennick is the Public Education Officer at the Freedom of Information Commission. In that role, Tom travels around the state, conducting FOI seminars and workshops, educating members of the public as well as public officials about their rights and duties under the Act. In addition, Tom is one of the principal architects of the Commission’s education initiative, which includes the Municipal Advisory Board and FOI Liaison programs. From 2001-2006 when the Legislature was in session, Tom served as the commission’s legislative liaison, testifying on proposed legislation and working with legislators on various bills. He still assists the commission’s legislative liaison during the session. Tom also spends a great deal of time on the telephone answering questions about the Act raised by the general public.

His background is in journalism. He was a newspaper reporter and editor from 1976-2001. He worked at the Middletown Press from 1976-1982 and again from 1988-1994 where he was a reporter, news editor and sports editor. He also worked at the Naugatuck Daily News from 1982-1988 where he was Executive Editor and Assistant Publisher and at the Waterbury Republican American from 1994 to 2001 where he was the Regional Editor.

Tom was born and raised in Naugatuck, Ct. and currently lives in Durham with his wife and three daughters. He is the chairman of the Regional School District 13 Board of Education and a member of the Nutmeg Financial MHC Board of Corporators. He is a 1972 graduate of the Taft School in Watertown, Ct. and a 1976 graduate of Brown University in Providence, R.I.

Tweet;
Posted by The Cool Justice Report at 7:48 PM