‘Governor of The Hidden Public Records’

Danbury Mayor Mark Boughton’s legal team – famous across the land for baseless threats against a local blogger – continues to write new chapters in the delay, deny, defend game over access to public records.

Curiously, these efforts now focus on stonewalling requests for financial records as gubernatorial candidate Boughton proclaims the mantra, “People Over Politics.” Already criticized for hypocrisy over his alliance with indicted former congressional candidate Lisa Wilson Foley, a flip-flop on gun control and deletion of critical Facebook comments on the gun issue, Boughton’s war on freedom of information poses a grave threat not only to the citizenry at large, but also to his own political fortune.

What was up with the Boughton-Wilson Foley deal? After the New Haven Register and Register Citizen broke the story that former Gov. John Rowland had a shadow role in Wilson Foley’s campaign while ostensibly working for her husband’s nursing home chain, Boughton helped deliver Danbury delegates to his former rival. Maybe he’s like Mother Theresa and just did it out of the kindness of his heart. Or, maybe there’s more to it. 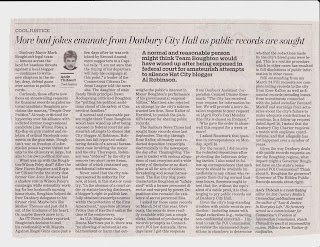 As CT News Junkie reported, Boughton’s decision to end his relationship with Mayors Against Illegal Guns came just a few days after he was criticized by Second Amendment supporters at a Capitol rally. “I am not sure that the timing of his departure will help his campaign at this point,” a leader of the Connecticut Citizens Defense League told the news site. The daughter of slain Sandy Hook principal Dawn Hochsprung criticized Boughton for “putting his political ambitions ahead of the safety of Connecticut families.” 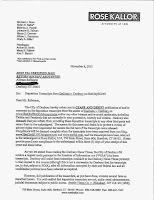 A normal and reasonable person might think Team Boughton would have wised up after being exposed in federal court for amateurish attempts to silence Hat City blogger Al Robinson ...

Posted by The Cool Justice Report at 6:05 AM