#JusticeForJane: Her imprisonment in adult jail without charges diminishes liberty for all


Cool Justice column starts after the photo of Niantic jail 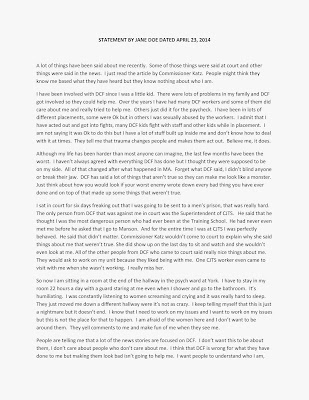 Cool Justice Editor's Note: We understand Jane Doe has faced juvenile charges; the extreme maneuvers placing her in segregation in adult jail, however, demand a better semblance of due process, transparency and accountability. Can't CT do any better than this? 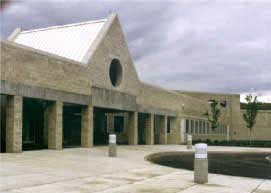 Cool Justice column
#JaneDoeDCF speaks: Her imprisonment in adult jail without charges diminishes liberty for all

I had been hearing about unwise and inappropriate incarceration of young women in Connecticut for many months, if not longer.

The calls built up as there was talk of a new and locked residential facility for delinquent girls in Middletown.

This is weighty stuff: damaged and endangered lives and practices and policies that some of our supposedly best and brightest can’t get right. 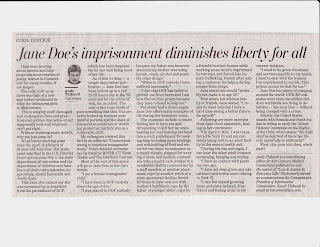 Without knowing many details, why not just jump in?

What better starting point than the April 12, 2014 affidavit of 16-year-old Jane Doe. Her statement was filed in the U.S. District Court action Jane Doe v. the state department of correction and the department of children and families and their commissioners, respectively, James Dzurenda and Joette Katz.

This Jane Doe cannot say she was protected by or benefited from the parenthood of DCF, which has been responsible for her well being most of her life.

As of this writing – a couple days before publication – Jane Doe had been locked up in a cell 22-23 hours day at the Niantic jail for the crime of, well, for no crime. The only crime I can think of goes something like this: You are herby locked up because your natural parents and the state of Connecticut could not or would not protect or nurture you as a vulnerable child ...

Posted by The Cool Justice Report at 4:39 AM