Before #BobbyKnight Inspired #Trump Campaign, He Was A Role Model For Certain Judges

In This Symbiotic Relationship,
He Emulated Them As Well… 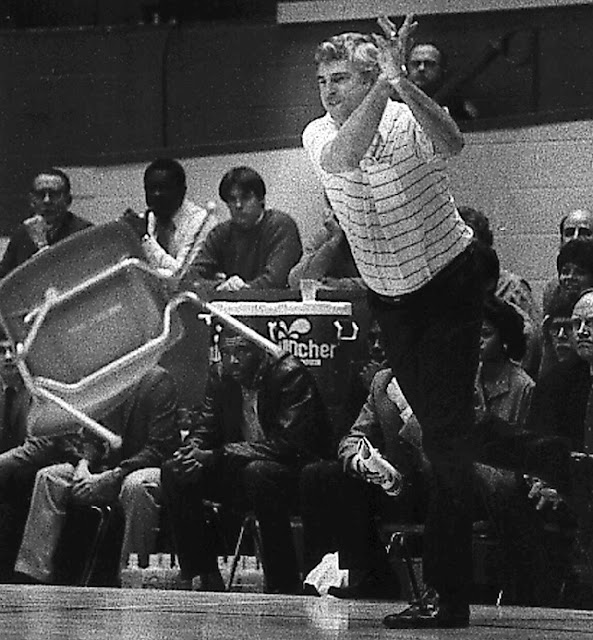 Knight, recently ousted from his post as coach of the University of Indiana basketball team, wanted a spot where he might only have to murmur, " Show me some respect." He had grown tired of throwing potted plants at framed pictures. He wanted a place where manners and civility really counted.

Of course, if Knight wanted to enforce his own "zero-tolerance" policy, it would be good to have his own Praetorian Guard carry out the mission. Guy and gal weightlifters and maybe a few good old boys would be nice.

That's when Knight heard there were openings for Superior Court judges in Connecticut. He prepared carefully and sent his application to the Judicial Selection Commission. Here's what happened.

Patience was in order. It couldn't happen right away. Knight learned this after just a little bit of research. He found that in some states the voters elect judges, but in Connecticut, three or four votes make all the difference in the world. The votes that really count include the chairman of the Judicial Selection Commission, one or two political leaders who might or might not be on the commission, and the governor.

Knight didn't want to serve 10 or 15 years in the Legislature making nice to other judges. None of his college roommates or home-town pals were among the real voters. So he visited a few judicial districts to discover the best route.

First stop was chambers of a judge affectionately known as "Melon Head."

"They said I couldn't make it 30 days on my own, but I showed 'em," Melon Head told Knight. "I called Lew Rome's [Power Broker, R] office three times a week for three years begging to get a robe. Finally, Rome got sick of me, palmed me off on Tulisano [Power Broker, D], and here I am!"

Knight learned that Melon Head had a pretty good situation. Most lawyers were afraid to try cases in front of Melon Head. Melon Head didn't want to try cases unless he absolutely had to. The settlement statistics for Melon Head's court were very impressive.

"This is looking better all the time," Knight thought.

Next stop, the Public Defender's office.

"I was almost indicted for disappearing with a state car," Slick told Knight. "They say I can't walk down the hall without bumping my head on the floor. Now I tell those other lawyers what it really means to administer justice."

Knight reflected before going on to his last stop.

"This is just like coaching basketball in Indiana," the coach thought. "If fear and greed rule the marketplace, the courthouse is just like the basketball court: fear and power are the two driving forces."

Maximum Bill's chambers was the final destination before Operation Judge Knight got off the ground.

"Even when I don't know what I'm doing, which is a lot of the time, it's not really a problem," Maximum Bill told Knight. "I just ask the lawyers how to proceed, right in open court. If I get flustered, I just bang the gavel and yell 35 years. Doesn't even matter what the crime is!"

Turns out some of the powerhouse law firms were fans of Knight. They made the right phone calls and the right donations. Knight passed muster at Judicial Selection and sailed through confirmation. He became the latest gift to the judiciary from the The Big Guys.

Once on the bench, Knight didn't even have to threaten to throw chairs. Once, however, a lawyer dared to object to a ruling. "I don't care what the ruling of the Supreme Court is," Knight said, "this is my ruling. Objection overruled. And next time, call me Mr. Judge Knight."

-- How Did This Go Unreported?
Oh, Yeah, It Did Get Reported

Maybe it was the column earlier this month suggesting that deposed University of Indiana basketball coach Bobby Knight would feel right at home among Connecticut's judiciary. Or the column last week opining that the entire bench needs a course in civility.

Or it might have been the editorial Oct. 2 describing the Judicial Review Council as an "arrogant protection agency" for the very judges whose conduct it is supposed to scrutinize. Judge Robert C. Leuba, chief court administrator for the judicial branch, didn't want to talk specifics Friday. But he also made no apologies for canceling the branch's subscriptions to the Connecticut Law Tribune because he doesn't like "the attitude that's crept in" to its commentaries.

And when Leuba says "cancel my subscription," he's talking about $16,000 worth of business for the weekly legal publication -- 26 subscriptions to the $365-a-year weekly, plus a dozen books the company also publishes. The subscriptions go to law libraries in courthouses statewide, and to a handful of judges.

Connecticut Law Tribune Publisher and Editor Vincent Valvo said Friday the cancellations don't put a significant dent in his paper's circulation or finances. But, he allowed, "We are not happy that the judiciary as a branch of government has decided to boycott us."

Columnist Andy Thibault wrote the Bobby Knight column, which Valvo characterized as "a parody, and certainly a pointed barb at the judiciary." Valvo said such columns jibe with his commitment to publish diverse viewpoints. He noted that few lawyers are willing to publicly criticize the judiciary, and we have to give that point of view a voice somewhere."

Leuba said it's not his intent to stifle the paper's opinions.

"He can publish whatever he wants to publish, but I'm also free to purchase whatever I want to purchase," Leuba said. "I told [Valvo] I'd be the first one to defend his right to publish anything he wants. But in terms of what we buy and distribute in the judicial branch, we have a choice, and right now we're not buying the Law Tribune.

"There are some attitudes being used editorially which are not helpful to improving communications among the legal community, of which we are a part," Leuba said. Asked if his concerns centered on columns by Thibault and New Haven Attorney Norman Pattis, Leuba declined to name names, citing again the paper's "attitude."

Valvo said Leuba's cancellation was not received in time to halt distribution of today's issue, or include mention of it in the Tribune. However, Pattis already has written a column about the cancellation for the Oct. 23 issue. And Leuba doesn't have to worry about missing that one: Pattis bought him a gift subscription.

Posted by The Cool Justice Report at 4:39 AM