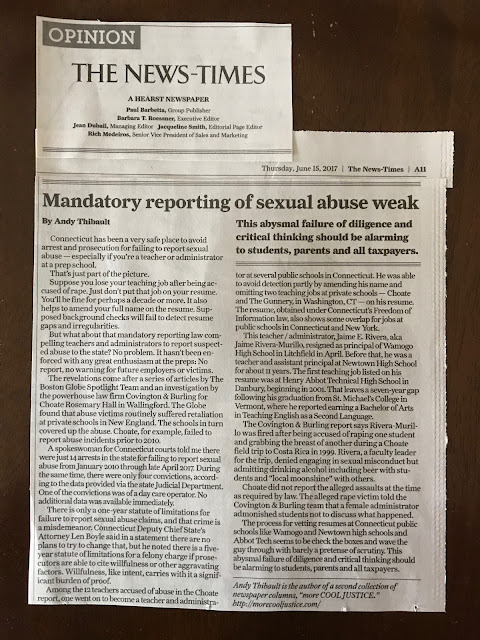 
Editor's Note: This column may be reprinted or re-posted courtesy of The Cool Justice Report http://cooljustice.blogspot.com.

Connecticut has been a very safe place to avoid arrest and prosecution for failing to report sexual abuse -- especially if you're a teacher or administrator at a prep school.

That's just part of the picture.

Suppose you lose your teaching job after being accused of rape. Just don't put that job on your resume. You'll be fine for perhaps a decade or more. It also helps to amend your full name on the resume. Supposed background checks will fail to detect resume gaps and irregularities.

But what about that mandatory reporting law compelling teachers and administrators to report suspected abuse to the state? No problem. It hasn't been enforced with any great enthusiasm at the preps: No report, no warning for future employers or victims.

The revelations come after a series of articles by The Boston Globe Spotlight Team and an investigation by the powerhouse law firm Covington & Burling for Choate Rosemary Hall in Wallingford. The Globe found that abuse victims routinely suffered retaliation at private schools in New England. The schools in turn covered up the abuse. Choate, for example, failed to report abuse incidents prior to 2010.

A spokeswoman for Connecticut courts told The Cool Justice Report there were just 14 arrests in the state for failing to report sexual abuse from January 2010 through late April 2017. During the same time, there were only four convictions, according to the data provided via the state Judicial Department. One of the convictions was of a day care operator. No additional data was available immediately.

There is only a one-year statute of limitations for failure to report sexual abuse claims, and that crime is a misdemeanor. Connecticut Deputy Chief State's Attorney Len Boyle said in a statement there are no plans to try to change that, but he noted there is a five-year statute of limitations for a felony charge if prosecutors are able to cite willfulness or other aggravating factors. Willfulness, like intent, carries with it a significant burden of proof.

"The one-year statute of limitations," Boyle said, "is largely consistent with the limitations periods for all crimes (i.e.: one year for a misdemeanor and five years for a felony). We have not sought to lengthen it. The more egregious cases of failure to report (willfulness, gross negligence, etc.) are felonies and provide a five year limitations period."

Boyle's office is investigating whether anyone at Choate broke the law by failing to report suspected abuse, The Hartford Courant reported in April.

Among the 12 teachers accused of abuse in the Choate report, one went on to become a teacher and administrator at several public schools in Connecticut. He was able to avoid detection partly by amending his name and omitting two teaching jobs at private schools -- Choate and The Gunnery, in Washington, CT -- on his resume. The resume, obtained under Connecticut's Freedom of Information law, also shows some overlap for jobs at public schools in Connecticut and New York.

This teacher / administrator, Jaime E. Rivera, aka Jaime Rivera-Murillo, resigned as principal of Wamogo High School in Litchfield in April. Before that, he was a teacher and assistant principal at Newtown High School for about 11 years. The first teaching job listed on his resume was at Henry Abbot Technical High School in Danbury, beginning in 2001. That leaves a seven-year gap following his graduation from St. Michael's College in Vermont, where he reported earning a Bachelor of Arts in Teaching English as a Second Language.

The Covington & Burling report says Rivera-Murillo was fired after being accused of anally raping one student and grabbing the breast of another during a Choate field trip to Costa Rica in 1999. Rivera, a faculty leader for the trip, denied engaging in sexual misconduct but admitting drinking alcohol including beer with students and "local moonshine" with others.

Choate did not report the alleged assaults at the time as required by law. The alleged rape victim told the Covington & Burling team that a female administrator admonished students not to discuss what happened.

The process for vetting resumes at Connecticut public schools like Wamogo and Newtown high schools and Abbot Tech seems to be check the boxes and wave the guy through with barely a pretense of scrutiny. This abysmal failure of diligence and critical thinking should be alarming to students, parents and all taxpayers.

"He didn't list Choate as a former employer when he applied," Christine Chinni, the lawyer for Regional District 6 which includes Wamogo, told The Boston Globe.

District 6 Superintendent Edward Drapp, asked about the committee of 12 that reviewed Rivera-Murillo's credentials and the review process, declined to discuss his procedures for background checks. Besides the resume, which he produced after a formal FOI request, Drapp was also asked to provide documents related to that review committee. Here is Drapp's response: "Attached is a copy of Mr. Rivera's resume. This is the only document in the district's possession that meets the criteria of your FOI request. For the remainder of the school year I will be focused on the students and therefore I am not doing any additional interviews or making any other statements on this matter."

The Globe reported in April that the sexual misconduct at Choate occurred from 1963 to 2010 and ranged from intimate kissing to groping and sexual intercourse. The Covington & Burling report cites 12 teachers. Other Globe stories cited more than 100 private schools in New England with more than 300 former students saying they faced sexual abuse or harassment.

Just last month, The Kent School was sued and accused of failing to report a 49-year-old teacher who had sex with a 15-year-old student in the late 1980s. 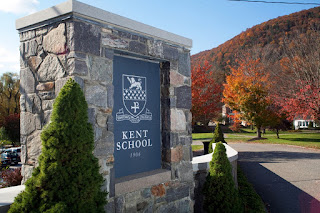 The student claims her advisor scolded her for spreading vicious rumors. Another teacher allegedly told the student she was a sinner for committing adultery. The suit claims the abuse was widely known at the school and that the student was shunned, called "obviously crazy" and blamed for the teacher's breakdown. During a church service the student attended at the school, the suit asserts, Kent staff openly prayed for the teacher's well being. The teacher subsequently got a job at a private school in Indiana.

Rev. Richardson Schell, the headmaster, said in a statement: "We do not know why [the student] has elected to pursue a lawsuit at this time."

Schell opened the statement by saying he had reviewed the complaint: " ... I am deeply sorry for the wrongful actions of the former Kent teacher who engaged in an inappropriate relationship with this former student ... as the Headmaster of the school then, I responded immediately and to the best of my ability."

The statement does not address the school's duty to report the alleged abuse in a timely manner.

Notably, Schell undertook a massive letter writing campaign some years later when he was annoyed by what he called a TV sitcom's "obnoxious, objectionable content." His letter writing campaign netted responses from 17 companies and he also reached out to publications including Advertising Age and Media Week to generate publicity regarding his concerns about popular culture, The New York Times reported.

Finally, on the national front, The Associated Press reported that a former president of Penn State and two other former university administrators were each sentenced Friday to at least two months in jail for failing to alert authorities to a 2001 allegation against ex-assistant football coach Jerry Sandusky, a decision that enabled the now-convicted serial predator to continue molesting boys.

Thibault, a private investigator for the Hartford office of Integrated Security Services http://www.intesecurity.com/, is the author of a second collection of newspaper columns, “more COOL JUSTICE” http://morecooljustice.com/, credited with helping to free a woman unjustly convicted of first degree murder. His public service includes four years on a local board of education. Follow him on Twitter @cooljustice. 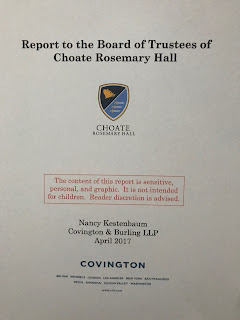 Posted by The Cool Justice Report at 1:18 PM