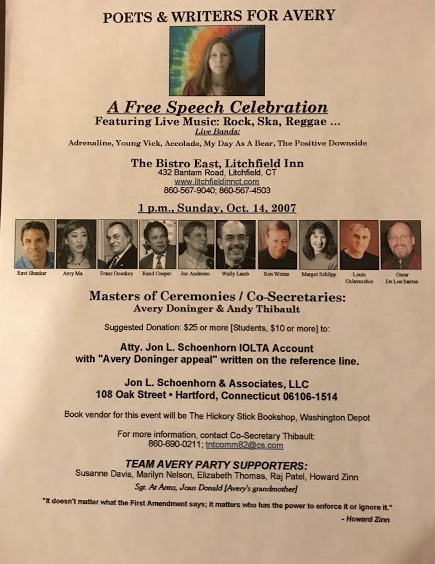 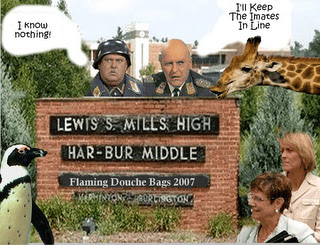 She and her mother, Lauren Doninger, sued then Principal Karissa Niehoff and Superintendent Paula Schwartz after they removed Avery from the ballot for Class of 2008 secretary. They were represented by Atty. Jon Schoenhorn. 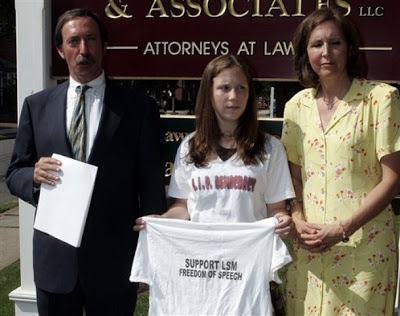 Schwartz became very upset after taxpayers called her and she cancelled the event known as Jamfest. Doninger subsequently referred to administrators in a live journal blog as central office douche bags, and Schwartz's son found the posting while trolling the internet for his mother a couple weeks later.

While Avery Doninger was banned from school office, another student who called Schwartz a dirty whore was given an award and lauded for citizenship.  School officials suppressed the write-in vote in which Doninger was elected by a plurality.

Schwartz refused to accept Doninger's apology for her choice of words. During an assembly, Niehoff banned free-speech and Team Avery t-shirts and seized at least one shirt.  The Doningers sought -- among other remedies -- an apology for civil rights violations, recognition of the write-in victory and sharing of the secretary position with the administration-backed candidate.

The U.S. Second Circuit Court of Appeals ultimately upheld suppression of free speech by the douche bag school bosses. Jonathan Turley, a law professor at George Washington University, said the ruling “cut deeply into student rights.” The Connecticut Freedom of Information Commission admonished school board lawyer Christine Chinni for being less than truthful about the availability of the suppressed ballots that elected Doninger. Then Commission Chairman Andrew O’Keefe characterized Chinni’s stonewalling as “offensive.”

AVERY’S CAREER IN HUMANITARIAN AID:
After serving in AmeriCorps and as a disaster relief volunteer in Haiti, Avery Doninger went on to earn an undergraduate degree at Eastern Connecticut State University in International Development and Social Justice – while also studying at University of Ghana and the University of Botswana.

She has worked in humanitarian aid work for the past 11 years in countries including Haiti, South Sudan, the USA, Ecuador, Ghana, Nepal, the Philippines, and most recently in Kenya with Doctors Without Borders.
MORE FLASHBACKS: More about Louis the Coin
https://cooljustice.blogspot.com/2021/05/louis-coin-was-banned-from-all-casinos.html
Louis memoir
https://louisthecoinbook.com/
Posted by The Cool Justice Report at 5:40 AM