But, Will She Get
To Speak At Graduation? 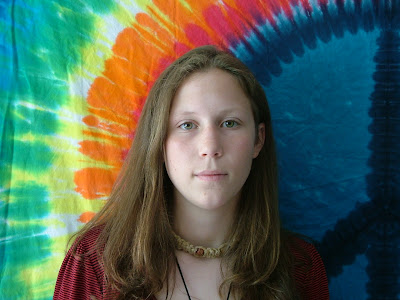 Responding to a May 30 article in The New York Post, Niehoff wrote to Midwestern educator Mike Morris about Doninger. Niehoff’s letter is loaded with unsubstantiated and undocumented allegations about Doninger, who will graduate from Lewis Mills High School next week.

Niehoff’s rant was published by The Cool Justice Report after Morris sent it along.

“The Professional Code of Conduct of the State of Connecticut For School Administrators has been breached,” the new school superintendent, Alan Beitman, wrote in a letter dated June 9 to Niehoff. “I will be scheduling you to attend Family Educational Right and Privacy Act (FERPA) workshops or other appropriate training sessions … I will ask you, when we meet in July to set goals for 2008-09, to develop at least one goal that will show your understanding of the seriousness of this matter and how this will be addressed in your evaluation portfolio.”

In addition, Beitman told Niehoff: “I would urge you to write a formal letter of apology to the student referenced in the email and to the student’s family.”

Meanwhile, Beitman and several teams of lawyers are reviewing about 500 of Niehoff’s emails.

Not one of Niehoff’s emails was produced following Freedom of Information Act requests beginning last August. Attorney Christine Chinni, counsel for the former superintendent, refused to tell the FOI Commission Wednesday whether any of those emails were responsive to the prior requests.


Oldie But Goodie From The Douche Bag Chronicles: 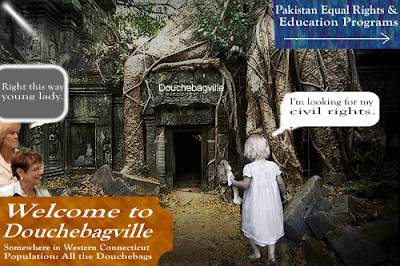 This year I have come to understand why liberty and justice are symbolized with scales. There is much to be balanced and decisions can weigh heavy. Since May 2007, a series of good and bad decisions, made not only by me, but also by others, has led me on a journey filled with risk and rich in learning opportunities.

The first decision that I made reflected positively on my character. I invested myself fully in student government and worked diligently in my elected positions. Frustrated over scheduling snags and short-notice cancellation of a school event (Jamfest), I went home and posted a blog on an obscure Live Journal page. In the blog I encouraged people to petition our administration -- a good decision; it was political speech. The bad decision was the opening line, "Jamfest is cancelled due to the douchebags in central office." Not my finest moment.

Along with other student leaders I rallied community support for Jamfest and the event was rescheduled. However, my decision to use an unsavory term was still sitting out there on the scales of justice, waiting to be weighed. A month after the scheduling was resolved, an administrator stumbled across my blog. Consequently, the principal punished me. She said I had to apologize to the superintendent, tell my mother, step down from all leadership positions, and withdraw my candidacy for secretary of the Class of 2008 (I had been secretary for three years). This was when the lessons from my civics class became increasingly relevant to my life. I agreed to the principal's first two requirements, but I refused the third.

The school administrator's had their own scales of justice -- my opinion did not tip the balance, and the punishment was final. Efforts to negotiate with the administrators were refused. A write-in campaign by my peers (I won a plurality of votes) was ignored; and "Team Avery, Support LSM Freedom of Speech" t-shirts were confiscated (illegal according to Tinker). As I researched civil rights and school law, my scale tipped, and I filed a lawsuit. This was a hard decision; I've never been in trouble: I am an engaged student, yet I did use an unsavory word. My mother also put my word choice on her scale of justice. She found my comment rude, sophomoric, and below the standards she has set. My mother's verdict, as one commentator put it, "Avery, you're grounded and we're going to the Supreme Court" (Colin McEnroe, October 2, 2007, WTIC am 1080).

At age 16 I became a citizen fully engaged in the democratic process. I filed for injunctive relief: not suing for money but for justice. I testified for four hours in federal court; I have done tons of print and broadcast interviews; I have spoken to large audiences about my story and the First Amendment rights; and I was the poster child for Poets and Writers for Free Speech. I have learned the big cases decided by the Supreme Court as well as how my case is distinguished. Most important, however, are the lessons that have become apart of me.

I believe in democracy. I believe in the Constitution and the Bill of Rights. I believe that each citizen is responsible for participating in the maintenance of democracy by challenging government officials when they overreach. The principal accused me of a failing to be a good citizen. I disagree. Apathy and passivity are poor citizenship. Rallying students and the community to petition the government is good citizenship. I failed at vocabulary, not citizenship. However, the First Amendment does not limit protection to those with sophisticated vocabularies (though I will not make the error of rudeness again).

Democracy is a gift that Americans have inherited, but it requires maintenance and vigilance. Democracy needs to be retained at the lowest levels if we are to have a democracy at the highest levels. If as citizens we refuse to defend liberty in our own backyards, how do we expect to bring democracy to Iraq or Korea or any place suffering under tyranny? Civil liberties are eroded slowly when citizens don't bother to insist on challenging unconstitutional practices. Citizens, particularly students who are the next generation of leaders, must be willing to take on the responsibility of maintaining and protecting democracy while enjoying the rights democracy affords.

Eventually, the scales of justice will determine whether students have speech rights off campus in the age of the Internet and whether there is a difference between shouldn't have said and didn't have the right to say. No matter the outcome in court, I am proud that I was willing to engage in the democratic and judicial processes. I will continue to defend civil rights, to think critically, and to consider the ramifications of my word choices. While I don't plan to live my life according to bumper stickers, I am going to think globally and act locally.


Following is a Readers Digest version of the Doninger case:

Avery Doninger, a senior at Lewis S. Mills High School in Burlington, CT, has a civil rights trial pending in New Haven U.S. District Court. She and her mother, Lauren Doninger, sued Principal Karissa Niehoff and Superintendent Paula Schwartz after they removed Avery from the ballot for Class of 2008 secretary.

The Doningers are seeking -- among other remedies -- an apology for civil rights violations, recognition of the write-in victory and sharing of the secretary position with the administration-backed candidate.

New Haven U.S. District Judge Mark Kravitz denied a motion for a preliminary injunction [immediate relief] last fall and his ruling was appealed to the Second Circuit in New York. That appeal ruling was posted May 29.
Posted by The Cool Justice Report at 9:26 AM

This kid is going places. She seems far more educated already than the principal. I'd be proud to be her mother.