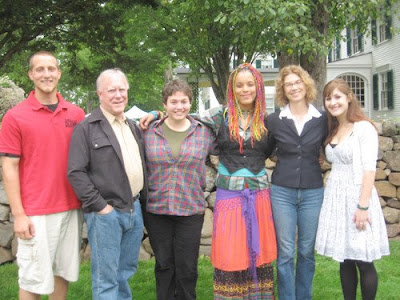 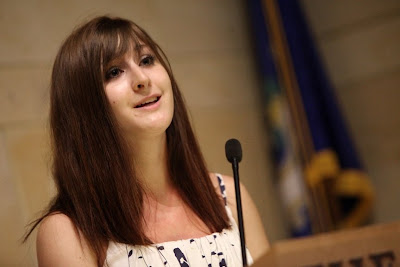 FARMINGTON, CT -- Melanie Lieberman -- keynote speaker for the Connecticut Young Writers Trust annual event in May at Mark Twain House and the 2007 state prose champion -- will perform July 8 at Sunken Garden, scene of the world’s largest traffic jam for poetry.

Joining Melanie and other young poets will be Emily Delano of Hall High School, a two-time county finalist in poetry from Hartford county.

They were among five young poets selected from a group of 80 in the Hill-Stead Museum’s 2009 Fresh Voices competition.

“These young poets represent some of the best writing being produced in Connecticut high schools today,” said Festival Director Cindy Cormier. “These bright young adults will literally dazzle the audience with their verse and poise.”

For students, the opportunity to read their work aloud in such an esteemed venue for poetry is an invaluable experience, according to Fresh Voices Competition judge Elizabeth Thomas.

“It’s often difficult to share what you’ve written ‘out loud’, and what these young poets are writing about are their own truths,” she said. “This is an opportunity to have a voice in a very positive, healthy environment. To have that opportunity is critical at this age.”

Lieberman, 18, recently graduated from Rockville High School in Vernon, CT, where she participated in the poetry club, book club, cultural enrichment club, and was the editor of both the RHS Literary Arts Magazine as well as the RHS Rampage newspaper.

In addition to winning IMPAC for prose in 2007, Melanie has also won first place in the 2008 National Drexel Playwriting Competition, and has been published in the CT Review, the CT Student Writer, and the RHS Literary Arts Magazine. She also co-wrote the Vernon Bicentennial Play and received 3rd in the National Rider University Writing contest for Fiction. In the fall, she will be published in The Apprentice Writer journal.

She also won a silver medal for her poetry collection in the 2009 National Scholastic Art & Writing competition. Melanie read her work at Bryant Park in New York City and was honored at Carnegie Hall on June 4.

Melanie plans to attend Emerson College in the fall, where she knows that she will major in creative writing and pursue a future in the exciting world of literature, publishing, and the written word.

Melanie hopes that her writing can one day have the same poignant effect on someone that the writers she loves have had on her.

The student poetry readings will precede a poetry performance by Kim Roberts, second place winner of Hill-Stead's prestigious 2008 Sunken Garden Poetry Prize, a national adult poetry competition. She will read from her prize-winning manuscript, Exhibitionist, a "beautifully crafted" work with "a strong range of approaches to form and fascinating materials," according to Gray Jacobik, Connecticut poet and adult poetry competition judge.

Before the poetry begins, guitarist, composer and educator Freddie Bryant returns to the Sunken Garden to perform Brazilian jazz with his New York-based trio. A graduate of the Yale University School of Music, he has been active on the New York music scene for over 20 years.

About the Fresh Voices Competition

Alex Guarco is a recent graduate of E.O. Smith High School in Storrs. He was introduced to poetry through Denise Abercrombie’s Creative Writing class and the inspirational lectures of Kevin Degnan. In 2009, he received an honorable mention in the Connecticut Writing Project. Alex is also a violist, varsity baseball player and wrestler. Alex will be attending Susquehanna University in the fall to continue his studies in creative writing.

Charlotte Beach is a sophomore at Wilbur Cross High School in New Haven. She also attends the ACES Educational Center for the Arts in New Haven for creative writing. Both her parents and her older sister are writers. She has great appreciation for her poetry teacher, Margot Schilpp, for helping her revise and polish her poems, Caroline Rosenstone for helping her perfect the reading of her work, and the students in her poetry class for all of their constructive comments. She is most honored to present her work at the Sunken Garden Poetry Festival.

Emily Delano is a soon-to-be senior at Hall High School in West Hartford and the Greater Hartford Academy of the Arts in Hartford, where she studies creative writing. She is a two-time county finalist for the IMPAC-CSU Young Writers Poetry competition. This summer, she is studying filmmaking at the Center for Creative Youth, a pre-college summer arts program at Wesleyan University.

A quadruplet of Nigerian and American parents, Martina Crouch is a Danbury High School senior. She began writing in middle school and has since evolved into a writer and storyteller of various genres. Her work has been published in her school’s literary magazine and she recently attended the New England Young Writers’ Conference in Vermont. According to Martina, some of her best poetry has been written on paper plates, homework assignments, and cheap napkins.

Second-place winner of Hill-Stead’s national Sunken Garden Poetry Prize, Kim Roberts is the editor of Beltway: An Online Poetry Quarterly, and the author of two books of poetry, The Kimnama (Vrzhu Press) and The Wishbone Galaxy (Washington Writers Publishing House). She has been featured in numerous anthologies and has published widely in national and international literary journals.

Roberts is the author of six plays, three of which have had full productions; one a staged reading at the Kennedy Center for the Performing Arts and two of which were published in 2006 in Ghoti Magazine. In addition, poems of hers have been set to music by an alternative rock band, Arc of Ones, and by classical composer Daron Hagen, and several have been choreographed by Jane Franklin Dance Company. Washington, D.C., where she makes her home, is the source of much inspiration for Roberts.

About the Freddie Bryant Brazilian Trio

Freddie Bryant is a versatile musician skilled both in jazz and classical music receiving his BA from Amherst College in 1987 and his Master’s Degree in classical guitar from the Yale School of Music in 1992. He currently teaches at Williams College in Massachusetts, in the Africana and Music departments, and at the Prins Claus Conservatory in Groningen, Holland. Freddie has performed with Wynton Marsalis, Max Roach, Lonnie Smith and guitar legend Kenny Burrell. Although he’s toured 41 countries and collaborated with a wide variety of musicians, Freddie is currently in demand on the New York jazz scene where he works with Ben Riley’s Monk Legacy Septet, which has a new CD, “Memories of T,” (Concord Records), the Mingus Orchestra and his own groups.

Freddie will play at Hill-Stead with Edson Café DaSilva, a Brazilian percussionist, singer, composer, and New York City native Gregory Ryan, who has established himself as an in-demand sideman on both acoustic and electric bass.

About the Sunken Garden Poetry and Music Festival

Festival gates open at 4:30 pm. Music begins at 6:30 pm; Poetry begins at 7:30 pm. Books and CDs are available for sale 5:30–8:30 pm. All performances will be at Hill-Stead Museum, rain or shine. Admission is free and open to the public. On-site parking is $10 per vehicle. Bring a lawn chair or
blanket for seating in and around the garden.

Al fresco dining is allowed on the West Lawn and in the Sunken Garden on performance evenings. Participants are welcome to bring their own picnic suppers, or purchase food and beverages on site from Metro Catering of Avon (sandwiches, salads, desserts, beverages, wines by the glass). Hill-Stead’s Sunken Garden is wheelchair accessible.

Celebrating its 17th season in 2009, the Sunken Garden Poetry and Music Festival takes place every other Wednesday evening from June 10 to August 5. Remaining performances this summer include:

A National Historic Landmark and an Official Project of Save America’s Treasures, Hill-Stead Museum in Farmington, CT, is a stop on the Connecticut Art Trail and a member of Connecticut’s Historic Gardens. The period rooms are open for tours Tuesday through Sunday, 10 am – 5 pm May - October and 11 am – 4 pm, November – April. Grounds are open daily 7:30 am-5:30 pm.

Stately trees, seasonal gardens and over three miles of stonewalls and woodland trails for walks or cross-country skiing accent the grounds at Hill-Stead. The centerpiece of the property is the c. 1920 sunken garden designed by landscape architect Beatrix Jones Farrand, today the site of the acclaimed Sunken Garden Poetry and Music Festival. For more information browse www.hillstead.org or call 860.677.4787. 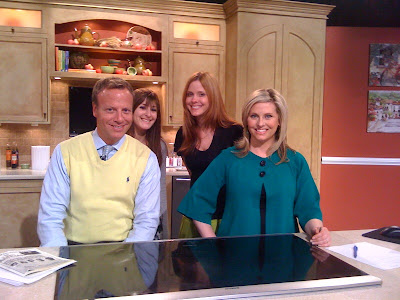 Hosts Scott Haney and Kara Sundlum and Connecticut Young Writers Trust keynote speakers Melanie Lieberman and Victoria Nordlund are pleased with the results of their strategy session after the show Friday morning [May 27].
-- Photo by friendly audience volunteer on i-phone


Collins Surpasses Pinsky In Bird Fan Race
How Will Upcoming Poets
Be Received By The Avian Community?

Posted by The Cool Justice Report at 5:13 AM