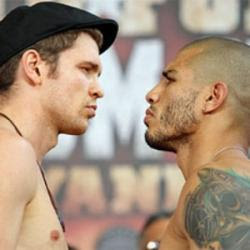 "I was making side to side movement and it gave out," Foreman said of his right knee. "It was a lot of pain, a lot of sharp pain. Couldn't do a lot of moves."
-- The Associated Press

"It's a great, great honor to be fighting in such a magnificent venue," said Foreman, who makes his home in Brooklyn and considers himself a Yankees fan. "It's a great opportunity for me to break in Yankee Stadium."
-- The Associated Press

"It's part of big fights," Foreman said, shrugging, as dozens of TV cameras captured his every move inside the sweltering Trinity Boxing Club.
-- Modesto Bee


"On the paper I might not be a power puncher, but believe me, a clean shot connects to the head, it's a painful, painful thing," he noted.
-- Brooklyn Daily Eagle


"You see white towel and you think it was over," Foreman said. "I didn't want it to be over."
-- FOXNews


"I was making side to side movement and it gave out," Foreman said of his knee. "It was a lot of pain, sharp pain. Couldn't do a lot of movement."
-- AFP


"Rabbi Pinson didn't know I was a boxer," Foreman says. "After class, he talked to us for a while because we were the new people. Gradually, after a couple of years of studying, I said, 'Whoa, this really helps me. It focuses me, it gives me...
-- USA Today


"I'm pretty boring," Foreman said. "I go home, I read a book, I watch a movie, pretty much relax, be with my wife - day-to-day stuff."
-- Times Herald-Record

"My jab is back, my movement is back, my left hook to the body is back," said Cotto, who had Hall of Fame trainer Manny Steward in his corner for the first time.
-- The Canadian Press


"I looked at the screen and I saw his trainer throwing the towel in the ring," Cotto said. "The referee said someone from outside the corner threw the towel into the ring."
-- The Associated Press


"I felt bad for him (Foreman) but you have to keep on fighting," the 29-year-old Cotto told reporters.
-- Reuters Canada


"We trained pretty good for this fight," Cotto said. "We came with a new mind for this fight, and we're just waiting for the night of the fight to see what Yuri can bring, and I'm more than 100 percent sure we'll be the new WBA champion."
-- USA Today


"My balance was awful before this camp, and it's much better," Cotto said. "We can throw punches and stay on balance. That's one of the things we've worked on in this camp."
-- Brownsville Herald


"We made the plan, work with the jab and put pressure on him - and it works," said Cotto, who set the tone with his jab from the opening round.
-- AFP


"I'll be better than ever," said Cotto, a former light-welterweight and welterweight title holder, who has a 34-2 with 27 knockouts. "I feel more comfortable. I'm working with more energy, more passion for the work at the gym. It is the same...
-- Times LIVE

Posted by The Cool Justice Report at 11:19 AM