Op-Ed On Election Home Stretch: Breaking Down Barriers From The Back Of The Bus 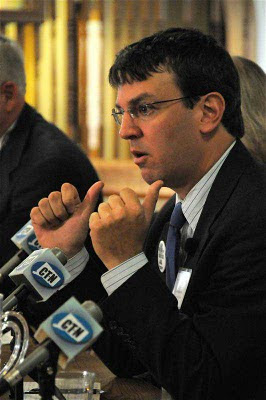 How many journalists and voters watched the four debates for the 1st Congressional District?

Of those, how many watched carefully?

Those who did watch discerned that I can make my colleagues in politics and journalism uncomfortable.

Discomfort is good. It is a precursor to change. Things are not OK. Our elected representatives are not doing enough for the middle class and the poor or anyone below the elite 1%. The elite 1% have compelled the government to do their bidding over last 30 years, resulting in the worst rich-poor gap in our nation's history.

The power elites do not want class warfare. They want class surrender and / or class ignorance. You don't have to be a Socialist or even a Green Party member to witness the obscene transfer of wealth from the middle class to the top since the Eisenhower years.

While we have torn down some barriers -- participating fully in four debates -- many thick walls to open civil discourse remain.

The Hartford Courant, for example, interviewed only the Democrat and Republican candidates for office. A smaller competitor -- The Torrington Register Citizen -- somehow found the resources of interview third-party candidates. This is a matter of editorial integrity when supposedly covering a campaign of ideas.

Our campaign revealed in the press and in debates that the incumbent, Democrat John Larson, was out to lunch when Congress voted on loosening Depression-era safeguards for the financial system, resulting in our ongoing crisis. Our campaign exposed Republican Ann Brickley's ignorance of the transfer of wealth as an issue, and she was chided for that by more than 50 shouting residents at a West End community meeting in Hartford. In front of more than 100 people at the Hartford Public Library, Brickley was unable to answer a question about the Hartford viaduct and its replacement. As part of the Eisenhower Interstate System, the viaduct is a federal issue requiring federal funds. Yet, while refusing to interview and virtually ignoring third-party candidates, The Courant proclaimed Brickley as a qualified candidate. Even by the wildest stretch, can anyone call this editorial integrity?

Our cultural events, including Battle of the Giant Poets at Szechuan Tokyo, raised awareness about the endangered acts of free speech and dissent during the era of the so-called Patriot Act. Two of the poets -- Ravi Shankar and Iyaba Mandingo -- were jailed in recent years because of the color of their skin and / or supposedly protected free speech activities. In a rare occurrence, Shankar recently won vindication for his racial profiling claim via a settlement from the city of New York.

Those of us who have labored in the vineyards of citizenship and suffered false incarceration are so much stronger now. We are stronger for standing up and we are energized by growing community awareness and support. Beyond the gates of the establishment media, citizens know they have to go to other sources for information. They know the broken two-party system is kept in place by a lapdog, status-quo enforcing media.

The stranglehold of money on the political process will be broken by rank and file citizens standing up and shouting, "No more!" And we wonder why nearly half the population refuses to vote for Tweedle-dee or Tweedle-dum.

We have struggled with some success to get beyond John Larson's $2 million in campaign funds and Ann Brickley's self-funding in the neighborhood of $200,000. Our own campaign has raised about $9,000, thriving on the good will and support of those who helped us with debate preparation, canvassing and cultural events.

Had anyone asked the Socialist candidate (yes, there is one), Chris Hutchinson, about his fundraising, he would have told you he was raising less than $5,000 because he does not want his supporters to be placed under federal surveillance. If the Socialists reported to the Federal Elections Commission like I had to after surpassing the $5,000 mark, it is likely his donors would be targeted.

After I was falsely arrested and incarcerated in January 2007 for taking photographs of Gov. Rell, the Courant was dominated by discussion about the correctness of state police secretly watching political parties like the Greens. The state police also watched the Democrats at that time. And, news recently came out that the FBI was watching Senator Paul Wellstone even while he was in office.

New organizations are inexcusably timid when it comes to reporting such government misconduct. Whatever happened to afflicting the comfortable and comforting the afflicted? Does anyone remember or practice the news motto: No fear or favor?

As long as media outlets like the Courant continue to treat candidates like myself as pariahs and illegitimates, the FBI, the state police and other law enforcement agencies in this growing surveillance state get free passes in tracking us as "dangerous dissenters." Clearly, the state of Connecticut learned nothing from my arrest.

The problems of political bigotry persist.

Take Tom Marsh, an elected first selectman and the gubernatorial candidate of the third largest political party in the state. He was rejected from the three largest televised debates in Connecticut, and was rejected from participating in other forums. I disagree with many elements of Marsh's platform, but I know there is a problem when Dan Malloy and Tom Foley get to go on John Dankosky's Where We Live on WNPR and Marsh is relegated to "Meet Your Fringe Candidate" with Colin McEnroe.

Then, McEnroe has the nerve to say that we fringe candidates are ungrateful because we complained about the name of his show. No, we are angered, and justifiably so, at the disparate treatment that political viewpoints receive from a biased media.

And let's not forget the high-traffic site,

Site owner Tom Dudchik knowingly chose expedience over accuracy when he shut me out of two polls. Based on the history of the district, the substance of the current campaign and the tenor of the nation, it is reasonable to project that I will receive anywhere from one- to 10-percent of the vote. The exclusion is a disservice to reader and voters. Presenting fundamentally flawed polls -- repeatedly -- raises serious issues of editorial integrity and credibility.

I don't consider myself a fringe candidate when Jeff Jacobs writes about my campaign activities on the front page of the sports page for the Courant. I don't consider myself fringe when the numerical tally on Capitol Watch, the Courant's political blog, shows I have as many posts written about me than my Republican opponent, Ms. Brickley. Our unofficial tally is 19, Krayeske; 13, Brickley.

It is clear that while the playing field is getting more level, there are still many opportunities for improvement. So Brickley, Larson, Hutchinson and myself debated four times this campaign. One of those debates, at Jumoke Academy, didn't happen without Krayeske for Congress pushing for it. If politics is a transformational experience, the three middle school moderators who questioned the candidates will never look at their lives the same again. So why do adults continue to look at this race with the same jaded eyes of money and electability instead of ideas?

Ken Krayeske, Green Party candidate for Congress in Connecticut's 1st District, was to be sworn in as an attorney on Monday, Nov. 1. The recent University of Connecticut Law School graduate is a long-time journalist and civil rights activist.

Posted by The Cool Justice Report at 6:48 PM