City of Danbury
'Orders' blogger
To shut up, Re; depositions 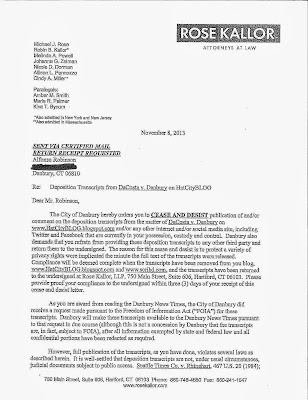 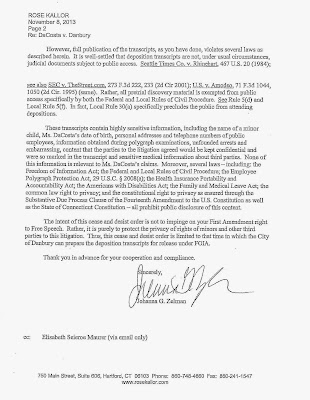 The Mark Boughton administration hit the self-destruct button with the force of a circus sledgehammer when it threatened and intimidated a blogger who dared to publish public records.

This extra-judicial threat has no legal authority and is bound to splatter back in the face of the would-be governor.

The Nov. 8, 2013 “order” from the Danbury mayor’s subcontracted law firm – Rose Kallor of Hartford – reads, part: “The City of Danbury hereby orders you to CEASE AND DESIST publication and / or comment … 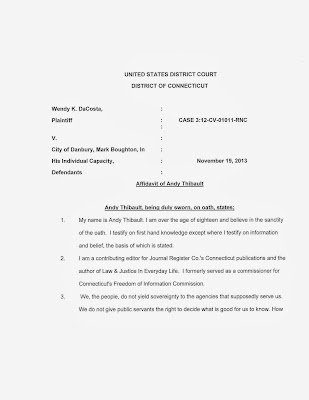 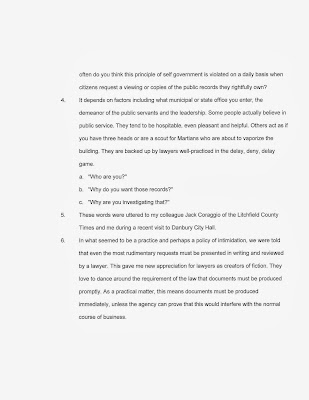 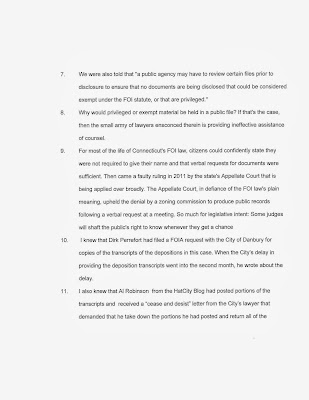 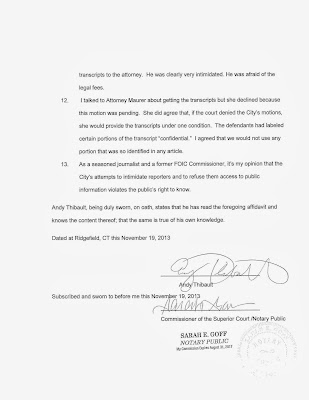 In a series of tweets with Hartford Courant Investigations / State Editor John Ferraro and the librarian / political columnist Susan Jane Bigelow last night, Danbury Mayor Mark Boughton asserted: “Our intention was always to release any documents as long as they were redacted of personal data .. [The cease and desist ‘order’ was issued because] Personal data of 3rd parties, medical issues, minor children's names, etc were not redacted …”

In reality, Hat City blogger Al Robinson had not published any personal or privileged data as part of an agreement with the lawyer for plaintiff Wendy DaCosta, who has every right to share the depositions with the public.

Nearly two weeks after a contentious federal court hearing to suppress the depositions, the city of Danbury is still seeking a protective order halting the release of normal and customary discovery information.

The Danbury News Times had requested the depositions from the city in September. The depositions should have been produced promptly at that time in compliance with Connecticut’s Freedom of Information law. Apparently the city provided redacted copies of some depositions to The News Times the day after Thanksgiving.

The last news report about the depositions from the Danbury daily was published Oct. 24.

ADDENDUM: In the public interest, original depositions should have been submitted in camera to the FOI Commission for review / redaction by competent and ethical lawyers. Any complainant can demand and facilitate this process.

... Supposedly the depositions as redacted by the city were produced for The News Times on Friday, Nov. 29. Thus, they should be viewable at Danbury City Hall at any time during regular business hours for no charge. As part of the normal course of business they would also be filed with U.S. District Court and shared with opposing counsel and all parties ...

“I know the folks at this law firm, and I generally respect their work. I will admit, though, that I find this letter disappointing in the extreme. While the City arguably cannot be prevented from sending a letter and making a demand -- or even threatening to take legal action if that demand is not met -- it has absolutely no legal authority whatsoever to issue an order of any kind with respect to those documents. The characterization of this demand letter by the City's attorneys as a ‘cease and desist order’ is a gross legal error that most certainly does, by its very nature, infringe on Mr. Robinson's First Amendment rights.”
Tweet

Posted by The Cool Justice Report at 11:53 AM