The Trust has given away more than $215,000 in prize money, and its winners have been featured at the Hillstead Museum’s Fresh Voices performance, in Connecticut Magazine and on television and radio. Parents and teachers, take advantage of this extraordinary opportunity by entering student work by midnight, March 15th, 2014. Details and online entry form at:


Chairman of the Connecticut Young Writers Trust & CCSU Professor Ravi Shankar notes, “The latest studies have shown that enrichment in the language arts, in reading, writing and fostering the imagination lead to a quantifiably healthier and happier life.

“Those who can articulate themselves lead longer lives and earn higher incomes, but more importantly show an empathetic inner life that can help connect us to others. In order to make our next generation competitive we need to encourage them to learn how to express themselves with craft and clarity. I’m so proud to be part of an organization whose primary objective is to help validate youth writing.”

The annual awards ceremony will be be held at CCSU on Sunday, June 1st where the state champions will be named. The Connecticut Young Writers Trust is also piloting a program bringing published authors into the schools. If you are interested in participating in this program or if you have any questions about the contest entry, please email [ctyoungwriterstrust2013@gmail.com]. Contact Chairman Ravi Shankar at 860-832-2766 or Vice Chairman Rand Richards Cooper at 860-232-4279 with further questions and see


for more details about the organization. 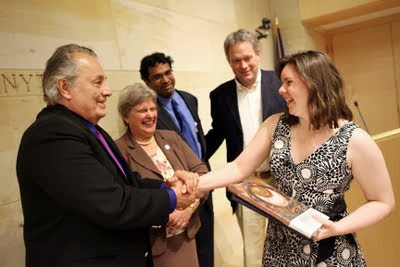 -- Emma Lowenberg, then 16, of the Lowenberg Home School in Redding, accepts check and other items Sunday [May 31, 2009] at the Mark Twain House & Museum in Hartford as she is proclaimed State Prose Champion in the 2009 Connecticut Young Writers competition. With Lowenberg, L-R: Franz Douskey, poet and author; Dr. Louise Feroe, then Vice Chancellor, Connecticut State University System; and Co-Masters of Ceremonies Ravi Shankar, the poet and Central Connecticut State University Professor and Rand Richards Cooper, board member, author and travel writer for Bon Appetit. Lowenberg won for her story, "Bernard." 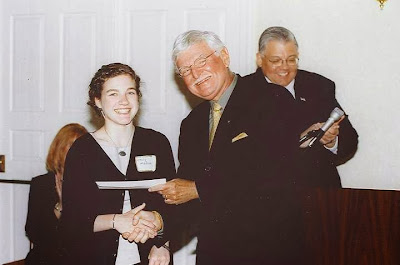 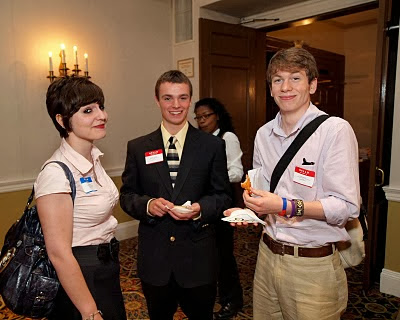 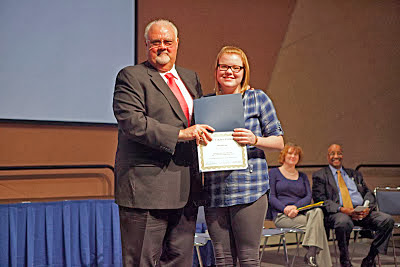 Morgan Finn of Bristol Central High School was one of six Connecticut students who were selected in 2011 from among 85 applicants for the 11th annual "Write On," Hartford Stage's annual young playwrights competition. Finn, A 2010 State Poetry Finalist in the Connecticut Young Writers competition, is shown above with with Dr. Jack Miller, President, Central Connecticut State University. In background are English Prof Heather Urbanski and then CSU System Chancellor, Dr. David Carter.
--Bristol Press photo by Chris Richie
Posted by The Cool Justice Report at 5:29 AM