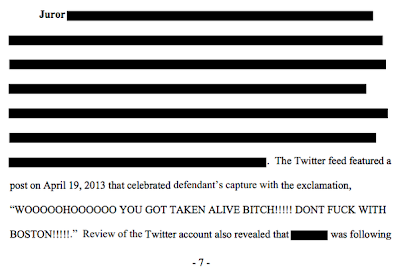 U.S. District Judge George O’Toole–in his third motion denying a change of venue for the Boston Marathon bombing trial–boasted again that “the process of interviewing prospective jurors in person … is proving successful.” 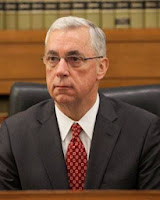 O’Toole pointed to a particular juror as an example of fair-mindedness:

One human resources professional explained that it was a common occurrence in her experience for her initial impression of the merits of a workplace controversy to be altered or even reversed when she had information from a fuller or more careful investigation, and so she had learned to keep her judgment suspended until she had all the necessary information.

The court interviewed this particular juror on Jan. 22, the fifth day of voir dire, as the individual questioning of prospective jurors is known.

However, the human resources professional O’Toole cited as a voir dire success story made quite a few statements the judge declined to note in his ruling …


Posted by The Cool Justice Report at 6:33 AM