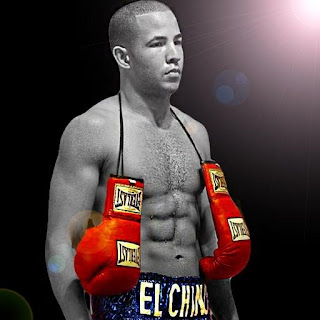 “My dream is to give my kids the best, for them to have a good father, and to be recognized in boxing as one of the best in Puerto Rican boxing history. I want my kids to be proud of me as a fighter for his family.” 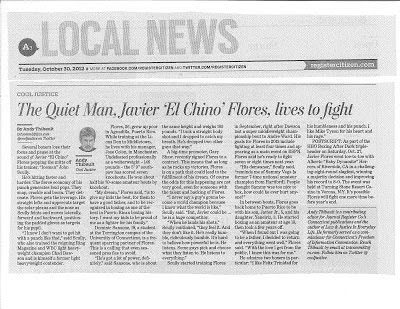 Several boxers lose their focus and pause at the sound of Javier “El Chino” Flores popping the mitts off his trainer, “Iceman” John Scully.

He’s hitting faster and harder. The fierce economy of his punch generates loud pops. They snap, crackle and boom. They detonate. Flores gets the leverage. His straight lefts and uppercuts target the solar plexus and the nose as Scully feints and moves laterally, forward and backward, positioning the padded gloves as targets for his pupil.

Flores, 26, grew up poor in Aguadilla, Puerto Rico. While training at the Lions Den in Middletown, he lives with his manager, Jose Colon, in Manchester. Undefeated professionally as a welterweight – 146 pounds – the 5’ 9” southpaw has scored seven knockouts. He won about half his 70-some amateur bouts by knockout.

“My dream,” Flores said, “is to give my kids the best, for them to have a good father, and to be recognized in boxing as one of the best in Puerto Rican boxing history. I want my kids to be proud of me as a fighter for his family.”

Dominic Sansone, 19, a student at the Torrington campus of the University of Connecticut, is a frequent sparring partner of Flores. This is a calling that even seasoned pros flee to avoid.

“He’s got a lot of power, definitely,” said Sansone, who is about the same height and weighs 165 pounds. “I took a straight body shot and I dropped to catch my breath. He’s dropped two other guys that way.”

A big-time promoter, Gary Shaw, recently signed Flores to a contract. This means that as long as he racks up victories, Flores is on a path that could lead to the fulfillment of his dream. Of course the odds for this happening are not very good, even for someone with the talent and backing of Flores.

“I never say a guy’s gonna become a world champion because I know what the world is like,” Scully said. “But, Javier could be … he is a huge competitor.

“When he lands his shots,” Scully continued, “they feel it. And they don’t like it. He’s really humble, ridiculously humble. It’s hard to believe how powerful he is. He listens. Some guys pick and choose what they listen to. He listens to everything.”

Scully started training Flores in September, right after Dawson lost a super middleweight championship bout to Andre Ward. His goals for Flores in 2013 include fighting at least four times and appearing as a main event on ESPN. Flores said he’s ready to fight seven or eight times next year.

“His demeanor,” Scully said, “reminds me of Sammy Vega [a former 7-time national amateur champion from Hartford]. People thought Sammy was too nice to box, how could he ever hurt anyone?”

In between bouts, Flores goes back home to Puerto Rico to be with his son, Javier Jr., 5, and his daughter, Yaneiriz, 3. He started boxing as an amateur at age 13, then took a few years off.

“When I found out I was going to be a father, I decided to return and everything went well,” Flores said. “With the love I get from the public, I knew this was for me.”

He admires two boxers in particular: “I like Felix Trinidad for his humbleness and his punch. I like Mike Tyson for his heart and his rage.”

POSTSCRIPT: As part of the HBO Boxing After Dark triple-header on Saturday, Oct. 27, Javier Flores went toe-to-toe with Alberto “Baby Dynamite” Herrera of Riverside, CA in a challenging eight-round slugfest, winning a majority decision and improving his record to 8-0. The event was held at Turning Stone Resort Casino in Verona, N.Y. It’s possible Flores will fight one more time before year’s end.

Andy Thibault is a contributing editor for Journal Register Co.’s Connecticut publications and the author of Law & Justice In Everyday Life. He formerly served as a commissioner for Connecticut’s Freedom of Information Commission. Reach Thibault by email at tntcomm82@cs.com. Follow him on Twitter @cooljustice.

Posted by The Cool Justice Report at 6:13 AM