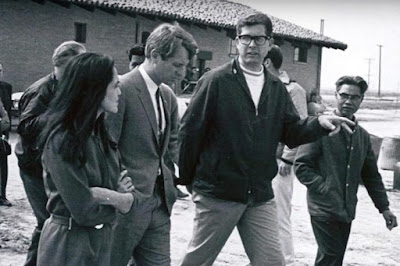 Robert F. Kennedy flanked by union organizers Dolores Huerta (left) and Paul Schrade (right). Huerta co-founded what would become the United Farm Workers. Schrade, also a union organizer, was one of five others wounded when RFK was assassinated in 1968.
- Photo courtesy of Mexican American Legal Defense and Educational Fund

Buried on page 271 of Robert F. Kennedy Jr.’s new book on the Skakel murder case in Greenwich is a quick, but telling reference to his father’s assassination.

As part of my summer reading I highlighted the passage. I had a visceral sense it was important.

Kennedy family members rarely have spoken publicly about the assassinations of either President John Kennedy or U.S. Sen. Robert Kennedy, much less criticized the official findings. The passage is noteworthy for the simple fact it is memorialized in a book. It is not just a comment in an interview.


Some of Kennedy’s claims and his book investigating the murder of 15-year-old Martha Moxley in Greenwich in 1975 have been panned by the state Judicial Department and other authors who chronicled the case. A state Supreme Court ruling on whether Skakel will face a retrial or be sent back to prison is expected this fall. A senior judge ruled in 2013 that Skakel did not receive a fair trial when he was convicted of the Moxley murder in 2002. Skakel was freed on bond after serving 11 years of a sentence of 20 years to life in jail.

That covers a lot of ground, and the next court decision will be big news. It seems to me the “footnote” on page 271 also is big news.

Following are two paragraphs from Kennedy’s book, “Framed, Why Michael Skakel Spent Over A Decade In Prison For A Murder He Didn’t Commit,” leading up to the clincher paragraph on the RFK assassination: 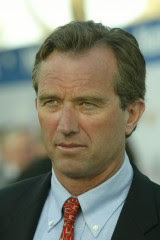 “I sympathize deeply with Dorthy Moxley [Martha’s mother]. I have seen up-close the agony of a mother’s grief over the loss of her child. my mother lost her husband to murder and two of her sons to violent, untimely deaths in the bosom of their youth. I was with her when my father died. I stood beside her 29 years later as my little brother Michael died in her arms.

“My mother told us that we needed to let go of our impulse for revenge and allow the cycle of violence to end with our family. This, she said, was the lesson of the New Testament, which swapped the savage eye-for-an-eye tribalism of the Old Testament for the ethical mandate that we turn the other cheek. But forgiveness wasn’t just ethics. It was salutary. Revenge and resentments, my mother said, are corrosive. Indulging them is like swallowing poison and hoping someone else will die. By opposing the death penalty for Sirhan, we diluted these poisonous passions. 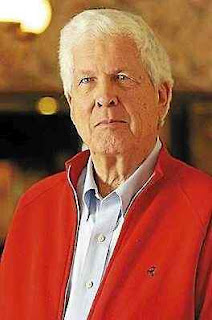 “And what if, God forbid, the object of our revenge turns out to be innocent? For several decades, my father’s close friend Paul Schrade [in recent photo, right], who took one of Sirhan’s bullets, has argued that Sirhan Sirhan did not fire the shot that killed my father. Recent forensic evidence supports him. How would we have felt now, if our family had demanded his execution?”

Like most Americans, I had not paid much attention to the forensic details regarding the RFK murder. What kind of evidence was RFK Jr. referring to? What is the significance of his dropping this tidbit toward the end of a book on another subject?

Robert F. Kennedy was shot just after midnight on June 5, 1968 in the back and in the back of the head at the Ambassador Hotel in Los Angeles. He had been celebrating his California primary win in his campaign for the Democratic nomination for president. Kennedy had become a vigorous opponent of the Vietnam War and an advocate for civil rights, unions and racial justice. His death came just two months after the murder of Rev. Martin Luther King Jr. 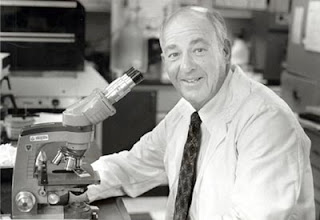 The renowned forensic pathologist and medical school professor, Dr. Cyril Wecht, assisted Los Angeles Chief Medical Examiner Dr. Thomas Noguchi in efforts to secure the Kennedy body and perform the autopsy. I reached out to Wecht this week to talk about the new Kennedy statement and the evidence cited by Paul Schrade and others.

Regarding Robert Kennedy Jr.’s statement in the new book, Wecht commented: “I think it’s commendable. I wish he had done it sooner.” 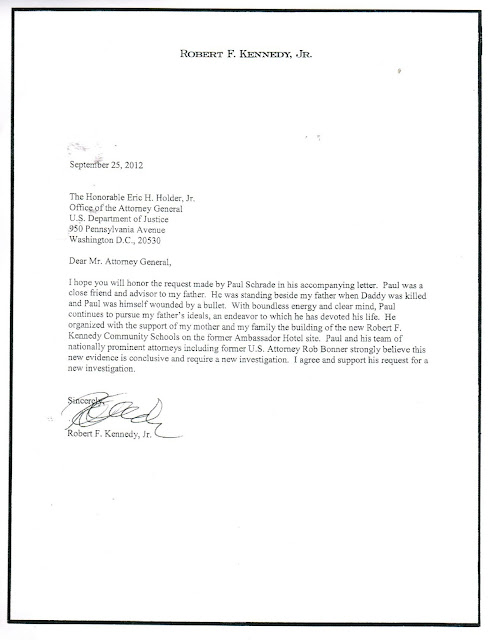 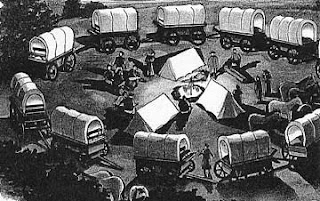 Posted by The Cool Justice Report at 3:21 PM