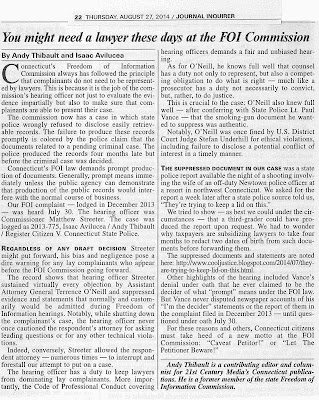 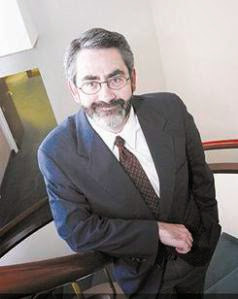 The esteemed lawyer Dan Klau offers professional and reasoned criticism of our beef with the Connecticut State Police bosses, the attorney general and the Freedom of Information Commission.

Trouble is, he misses the boat, as only a lawyer could.

Klau states that hearing officer Matthew Streeter sustained most of the objections raised by Asst. Atty. Gen. Terrence O’Neill. A review of the record shows virtually all of the objections by the “people’s lawyer” were sustained.

Why should a citizen have to hire a top-gun lawyer to chew up the likes of Streeter and O’Neill? We could have brought in any number of lawyers who would have shut them both up effortlessly. But, to what end? Certainly not justice.

A hearing officer, even an assistant attorney general, must indeed do justice.

Streeter and O’Neill both failed miserably in this regard.

Streeter did indeed suppress evidence that normally and customarily would have been admitted. This includes the smoking gun police report written the night of the incident. As we note in the op-ed, O’Neill knew this document was true and authentic when he conferred with State Police Lt. Paul Vance.

Klau cites a recent state Supreme Court decision that – from the day it was issued – enabled state police to hide even more public records. That is a matter for Klau and other like-minded citizens to rectify. This decision, however, was not in effect last November when the state police broke the FOI law by withholding readily-available documents.

More to the point, in this era of Sandy Hook and Ferguson, what do the Connecticut State Police have to say about earning the public trust?

Vance has absolutely nothing to say. He seemed to act as if we were talking Martian when we asked him if state police have a duty to earn the public trust by producing public records promptly.

Try to get a public record from Vance. He’ll send you right away to the lawyers. They’ll take four months to produce a document that is readily-available on the spot. Maybe they’ll delete a date of birth or two.

Legal relevance is in the eye of the hearing officer or judge. As Klau knows, these public servants have incredibly wide latitude in administering the law.

Streeter erred by suppressing the two documents we presented and by empowering O’Neill to shut down our case at every turn.

As Klau noted, I bring some experience and knowledge to the table in this regard as a former FOI commissioner.

Andy, thanks for taking the time to respond to my post. I have a few thoughts in response. I’ll try not to miss the boat this time, although I think that may be difficult. In reading your response, it seems to me that our differences correlate with our respective lay person/attorney statuses. In particular, your comments reflect a notion of what the law “should be,” whereas I’m focused on what the law “is.”

Let me begin by stating that I generally agree with you on what the law should be. The State Police should release complete police reports immediately, without redactions, unless they have a persuasive argument that doing so would prejudice a prospective law enforcement action, reveal the identity of a confidential information, or release other information exempt under General Statutes section 1-210(b)(3), otherwise known as the “law enforcement” exemption of the FOIA. I’d also like to take this opportunity to remind the State Police, indeed all law enforcement officers in Connecticut, that just because the Freedom of Information Act may not require you to produce a document in certain instances, that does not mean it forbids you to do so.

In fact, the Office of the Attorney General issued a formal written opinion in 2005 that reminded state agencies that, “[u]nder the FOIA, exemptions are permissive, not mandatory. Public agencies, therefore, retain the right to determine whether and when to assert an exemption, depending on policy determinations of the need for confidentiality.” See Office of the Attorney General, Opinion No. 2005-026, 2005 WL 4258776 (Conn. A.G. Oct. 14, 2005). In short, an agency may release information even if it is not required to.

Unfortunately, as much as I share your view of what the law should be, and look forward to continuing to work with you to make our government more open and transparent, I know that the law in this particular case is not what you would like it to be. Contrary to your view, legal relevancy is not in the eyes of the beholder. That is not to say that people never disagree on questions of relevancy. But not all cases are close calls.

You argue that the recent Connecticut Supreme Court decision I mentioned in my post only established “what the law is” (my quotes) as of the date of the release of the decision. Therefore, you argue that the law as it existed at the time you made the request for the police report required the police to release the report immediately. That argument raises an interesting question about the “retroactive effect” of a judicial decision. I can’t discuss the law of retroactivity in detail in this reply, but I can say that your argument is incorrect. Thus, the hearing officer in your case was justified in relying on the recent Supreme Court decision as setting forth the controlling law in your case. I know that may seem very unfair. Perhaps it is. But it is legally correct.

So, at the end of the day, I still understand your frustration with the hearing. My main point is this: The FOIC is bound to follow the law. If you don’t like the law, the answer is not to get upset with the FOIC. The answer is to persuade enough legislators to change the law.

Dan, your condescending tripe in paragraph one scores no points. You lose Round 2 by a self-inflicted knockdown. In professional scoring, that’s a 10-8 round for me – if you make it off the canvas. I’ll assert my expertise here as a professional boxing judge.

I was taught decades ago to eat lawyers’ bones for breakfast. I do not defer to your alleged expertise, training, position or intellect. Rather than the hokum you assert as an “officer of the court,” my comments are based on my real life experience as a hearing officer and as a professional detector of bullshit.

You sound like someone who is running for judge. Your deference to institutions and their flunkeys is disheartening at best.

You make a good point that law enforcement would do well to come clean with public records, even when they think they don’t have to. Prudent leaders in law enforcement do this to build public trust because they actually believe in public service.

So, the AG put out a memo to this effect. Big freakin’ deal. I watch what the AG does, not just what he says. He routinely assigns overpaid hacks – without due diligence – to hide public information for state agencies. In this regard, we can all see how the government class protects itself while paying lip service to citizens during election season.

Your specious claim that legal relevance is not in the eye of the beholder is comic at best. I guess you have never seen a judge or hearing officer act arbitrarily or capriciously or in violation of U.S. Supreme Court rulings.

Lt. Vance and other state police officials violated the FOI law multiple times beginning last November in this case. During the hearing, Vance displayed shocking ignorance of his duty to the public trust. He admitted, that as a highly-paid “public information officer,” he provides virtually no public information. Instead, he just sends citizens to the black hole of the legal department. These “police state” practices cannot be tolerated in a free society. Moreover, they do great harm to the good rank and file troopers who perform public service every day by eroding public trust and engendering disrespect for law enforcement.

At the end of the day, go contemplate something before trying to tell me or anyone else what to do or what to get upset about. You missed the boat again, maybe as you sort of admit, because you have the vision handicap of being a lawyer.

It’s not only the law, it’s also the process. The FOI Commission used to be a place where a lay person could make a complaint and not get jerked around by lawyers.

I’m putting it back on you to show you are serious with action to correct the abuses of FOI by public servants including cops, prosecutors, judges and legislators. Don’t rely on the all-too-often mythical “administration of justice” to protect our right to know when the government and courts screw people slowly, like a knife in the back, inexorably destroying all our civil rights.

Those who steal public records are stealing democracy itself. If these trends continue, pretty soon we will have to go through road blocks and have our papers checked.

Andy, I’m not sure how to respond to your last. I fear our conversation is descending into “Jane, you ignorant sl-t” territory. I think we are just going to have to agree to disagree on this one. I’m tempted to get up from the canvas and continue the good fight, but I foresee simply another blow to the head if I do.
Reply
3. andy thibault
August 22, 2014 at 3:19 pm

Look forward to working together on FOI reform … we both took some punches … would like to channel this into mutual interests … for the public good.

In friendship and appreciation,

The feeling is mutual.

Re: Commissioner of Public Safety v. Freedom of Information Commission et al., the AAG arguing that case in front of the Supreme Court (incidentally, Terrence O’Neill) conceded while responding to a question from Zarella that police have to produce some sort of “narrative” beyond the bare blotter information, or “the news release would be a sham.”

So however bare it is, the public is entitled to some sort of narrative beyond the blotter information, no?

“No your honor,” O’Neill said. “At that point, the news release would be a sham.”

“That’s not a news release, that’s blotter information,” O’Neill went on. “Clearly, the statute, to be given full force, requires the production of some document that contains some narrative.”

Oh, man, I was hoping the argument would go further – minus the personal attacks. I thought the discussion was just getting started.

Posted by The Cool Justice Report at 3:44 AM