The NSA and other surveillance issues are in the news, with new disclosures all the time. I’ll have amplification on how surveillance and retrieval can have the potential to undermine the freedoms we take for granted.
-- ANDREW KREIG 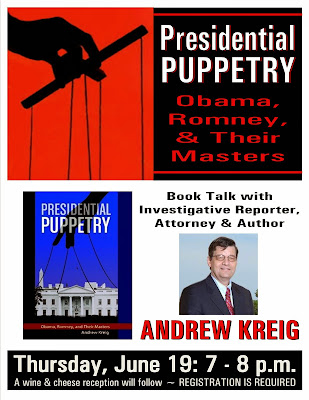 Before the library appearance, Kreig will also speak at a meeting of the Litchfield-Morris Rotary honoring foreign exchange students … details to follow ...


Here’s a message from Kreig about his upcoming CT tour:

I’m thrilled to return to the region where my reporting career began in 1970 with 14 years at the Courant, and am grateful for the mention here on the alumni and refugee camp site.

There are other events in the works (including one on a date TBA in Hartford) for this and future trips. I’ll get out the word soon. If you don’t see anything please contact me: andrew.kreig@gmail.com.

It should be fun to see old and new friends!

Also, it’s relevant that the controversies stemming from my first book, “Spiked,” provided excellent preparation for the years ahead, including what I’m doing now in the barracuda tank of DC. As best I can tell, mine is first overall book about the Obama administration’s second term. More than two decades ago, I became a lawyer with a large firm in DC and then VP/general counsel and then president/CEO of the Wireless Communications Association, whose mission during my years from 1993 to 2008 was transform a vision of a wireless Internet into reality. There’s no way I could have proceeded, including a dozen years as president/CEO, without the experience of the “Spiked” research and its controversies as preparation. As it happened, Michael Davies left the Baltimore Sun and became an investment advisor active in my industry. I authorized publication in our newsletter of a financial column he co-authored, and welcomed him as an attendee when I spotted him at our annual convention one year. He called me “Mr. Kreig” at the time, though I doubtless remained, as noted here, among his unfavorites.

I share this update because I think it helpful for all of us to go beyond the past. Understandably, I’m best known to many on this list as somewhat notorious. For what it’s worth, I look on the book as an obligation and wouldn’t change a word. I moved on when it was done (including the defense of it for a year until no one was willing to challenge any of it publicly anywhere as far as I knew).

The lessons learned proved useful in DC in many ways, especially as I found new ways to compare rhetoric with reality. “Presidential Puppetry” draws on 170 years of history to reveal missing information that makes more understandable today’s headlines — and what’s ahead in what are high stakes for us all.

If any of you are in a position for an interview I’d love to arrange one on topics apt for your audience. I’m speaking a lot these days on the 2016 race (why Jeb Bush will be the nominee, for example), U.S. legal reforms, the Ukraine crisis and on the 50th anniversary of the Warren Commission report next fall.

But we can’t be serious all the time, and I’m planning at least one of events to be festive and fun. Hope to see you!

Posted by The Cool Justice Report at 5:26 AM